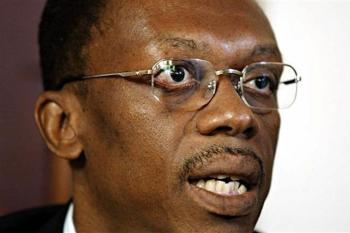 The government of President Jean Bertrand Aristide (above) met with farmers’ associations and unions and proposed buying all Haitian-grown rice in order to stabilize the price, limiting rice imports during periods between harvests.

"We are all living under a system so corrupt that to ask for a plate of rice and beans every day for every man, woman and child is to preach revolution."

Haiti’s hunger crisis is no accident – it is the direct result of U.S. economic policies imposed on rural Haiti beginning in the 1980s. The story of how the U.S. undermined Haiti’s domestic rice industry explains why a nation of farmers can no longer feed itself.

The story of rice

The story of Haitian rice begins in Africa, where rice has sustained African peoples for centuries. Rice was so basic to the West African diet that it was an essential provision on slave ships, accompanying captive Africans to Brazil, the Caribbean and the southern United States. (1) Today, testament to 10 million souls kidnapped from their homeland, every region touched by the African diaspora has its own unique version of rice and beans. (2)

Rice cultivation in the United States is deeply rooted in slavery. Black Rice author Judith Carney writes, “Few Americans identify slavery with the cultivation of rice, yet rice was a major plantation crop during the first three centuries of settlement in the Americas… By the middle of the eighteenth century, rice plantations in South Carolina and the black slaves who worked them had created one of the most profitable economies in the world.” (3) European settlers knew nothing about the complexities of growing, harvesting and threshing rice. But enslaved Africans did.

A basic staple of the Haitian diet, rice has been cultivated in Haiti since its 1804 independence. Until the 1980s, Haitian farmers produced most of the rice consumed in Haiti. Under the U.S.-backed dictator Jean-Claude Duvalier and the brutal military regimes that followed, domestic rice cultivation began to plummet. In the space of a few decades, Haiti became the world’s fourth largest market for American rice. By 2004, the value of U.S. rice exports to Haiti amounted to $80 billion. How this colossal tragedy came about is a story of foreign intervention, government corruption, and corporate greed backed by ruthless repression.

Ronald Reagan’s 1984 Caribbean Basin Initiative prompted a major increase in U.S. food aid to Haiti. In 1984, Haiti received $11 million in food aid; from 1985-1988, Haiti received $54 million in food aid. (5) The Caribbean Basin Initiative called for integrating Haiti into the global market by redirecting 30% of Haiti’s domestic food production towards export crops, a plan that USAID experts systematically carried out. The United States fully recognized that this would lead to widespread hunger in rural Haiti, as peasant land was converted to grow food for foreigners. Food aid was supposed to compensate rural Haitians for this attack on their livelihood. (6) Food aid benefits the big American companies who grow and transport it, but wrecks local economies. As cheap American food undersold Haitian farmers’ produce, domestic agriculture became even less sustainable. In effect, food aid created a dependence on foreign imports.

How was the United States able to impose its will on rural Haiti? At the time, Jean-Claude Duvalier, the son of Haiti’s infamous dictator, Francois Duvalier, ruled Haiti. Like his father, the younger Duvalier held onto power by controlling Haiti’s repressive security forces. He received millions in U.S. aid intended to maintain U.S. influence in the Caribbean as a bulwark against Cuba. The Reagan administration conditioned U.S. aid on Duvalier’s support for the plan to restructure Haiti’s economy.

Thus began the most massive foreign intervention in Haiti since the 1915-1934 American occupation.

In February 1986, a popular uprising forced Baby-Doc Duvalier out of power. After he fled Haiti, raiding the treasury as he left, a military junta headed by General Henri Namphy took power. Predictably, the United States aligned with the junta and intensified measures to restructure Haiti’s economy. In 1987, Namphy received IMF loans valued at $24.6 million in exchange for agreeing to slash rice tariffs from 150% to 50%, (7) the lowest in the Caribbean. (8) He opened all of Haiti’s ports to commercial activity (9) and agreed to stop what little support the government had offered Haitian farmers. Meanwhile, Haiti’s military elite saw an opportunity to make a profit smuggling American rice.

In the United States, the passage of the 1985 Farm Bill significantly boosted subsidies to American rice growers. By 1987, 40% of American rice growers’ profits came from the government. (10) Heavily subsidized American rice could sell at prices far below the market value of Haitian rice. Haitian farmers never stood a chance against this unfair competition.

In Haiti, imported American rice is called “Miami rice” because it is shipped from Miami in sacks stamped “Miami, FLA.” By December 1987, Haiti’s rice production had shrunk to 75% of Haitian needs. (11) Outraged Haitian peasants barricaded highways and ports for three months to protest the cheap American rice that had begun to flood Haitian markets. They attacked truckloads of Miami rice with machetes, picks and clubs, dumping rice onto the earth.

The late Fr. Gérard Jean-Juste, a Haitian priest and human rights advocate, later recalled this era: "In the 1980s, imported rice poured into Haiti, below the cost of what our farmers could produce it. Farmers lost their businesses. People from the countryside started losing their jobs and moving to the cities. After a few years of cheap imported rice, local production went way down." (12)

By 1990, the year Jean Bertrand Aristide was elected President in Haiti’s first democratic election, U.S. rice imports outpaced domestic production. (13) Aristide was the candidate of Haiti’s popular movement, Lavalas. He won with 67% of the vote. His February 1991 inauguration marked a victory for Haiti’s poor majority after decades of Duvalier family dictatorships and military rule, signaling participation of the poor in a new social order. The new administration began to implement programs in adult literacy, health care, and land redistribution; lobbied for a minimum wage hike; and proposed new roads and infrastructure. Aristide enforced taxes on the wealthy and dissolved the rural section chief infrastructure that empowered the paramilitary force known as Tonton Macoute. He closed Fort Dimanche, the dreaded Duvalier-era torture center. (14) The Aristide government met with a large coalition of farmers’ associations and unions and proposed buying all Haitian-grown rice in order to stabilize the price, limiting rice imports during periods between harvests.

Just seven months after his inauguration, President Aristide and the democratic government were overthrown in a bloody military coup led by General Raoul Cédras. Trained in the United States and funded by the CIA, Cédras commanded the Haitian Army. His regime unleashed the collective violence of Haiti’s repressive forces against its own people. From 1991-1994, nearly 5,000 Lavalas activists and supporters of the constitutional government were massacred; many others were savagely tortured and imprisoned. Rape as a political weapon was widespread. Some 300,000 Haitians were driven into hiding, while tens of thousands fled the country.

Around the world and in the United States, there was a massive outcry demanding the restoration of democracy and the return of President Aristide. Aside from the Vatican, few governments recognized the illegal Cédras regime, widely condemned for its sweeping human-rights abuses. This did not stop American Rice Inc. from collaborating with the ruthless military regime to turn a profit. In September 1992, barely a year after the coup, American Rice Inc. negotiated a nine-year contract with the illegal Haitian government, importing American rice under its newly formed Rice Corporation of Haiti. (15)

American Rice Inc is a subsidiary of Erly Industries, a powerful international agribusiness. The company holds an almost monopolistic position in Haiti’s rice market. (16) In the 1980s, American Rice Inc imported rice under its brand Comet Rice, which constituted much of the Miami rice that ravaged Haitian rice production at the time. (17)

Bill Clinton’s 1992 election took place during Haiti’s repressive Cédras regime, when President Aristide lived in exile in the United States. After Haiti’s 2010 earthquake, Clinton famously apologized for forcing Haiti to lower its rice tariffs during his administration. He acknowledged that he helped big Arkansas agro-businesses reap profits at the expense of Haiti’s rice farmers. But Clinton left a lot out of the story.

Clinton posed as mediator between the coup leaders and President Aristide to negotiate the return of Haiti’s democratically elected government. He took advantage of this role to use the threat of continued repression as a bargaining chip. While the U.S. stalled, demanding more and more economic concessions – displaying not-so-covert support for Haiti’s military regime – the junta continued murdering supporters of the constitutional government.

Within this coerced context, Aristide resisted the U.S. neoliberal plan. He insisted that discussions demanded by the financial institutions for the proposed sales of state-owned enterprises include benefits for the poor – opportunities for co-ownership, funding for health and education, reparations to the victims of the coup. (18) Aristide would later refuse to move forward with privatization, disband the Haitian military over strong U.S. objections, raise the minimum wage and bring paramilitary leaders charged with extra-judicial killings to justice. (19)

By the time President Aristide returned to Haiti in October 1994, the collapse of the country’s rice production was a fait accompli, victim of a long and deliberate U.S. campaign waged against Haitian farmers in collusion with successive Haitian dictators and military regimes. Imported Miami rice constituted 80% of Haiti’s domestic consumption. Rice smuggling was common, enabled by the corrupt Cédras regime, which accepted bribes instead of enforcing tariffs. (20)

Nothing changed after Clinton’s apology either. Haiti’s 2010 earthquake became yet another business opportunity for foreign corporations to overrun Haiti’s economy, while food aid, callously tossed off trucks to desperate Haitians, meant more revenue for U.S. corporations. Nor should we let Clinton off the hook for forcibly repatriating thousands of Haitian “boat people” fleeing tyranny under the junta, and intercepting 12,000 other refugees who were illegally imprisoned at Guantanamo Bay.

There are two opposing visions of Haiti’s future – one projected by Fanmi Lavalas benefits the poor majority; the other imposed by the United States and wealthy foreign nations enriches international corporations and the Haitian elite. What is clear is that Haiti’s people must prevail over foreign profits and the wealthy elite. This means real democracy and respect for Haitian sovereignty.

10) Aristide, Jean-Bertrand. Eyes of the Heart: Seeking a Path for the Poor in the Age of Globalization. Laura Flynn, ed. Monroe, ME. Common Courage Press, 2000, p12.