Jovenel Moïse in Taiwan: How the Republic of China Is buying Haiti, again 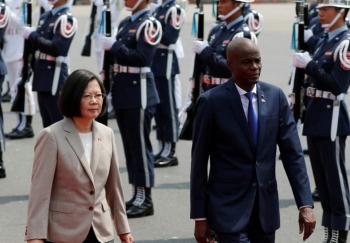 President Jovenel Moïse shaking hands with Taiwanese president Tsai Ing-wen. All he has netted so far is apparently a $150 million loan to “electrify Haiti.”

From May 26 to Jun. 1, 2018, Haitian President Jovenel Moïse and First Lady Martine Moïse are heading a 30-person delegation on a “state visit” to the renegade Chinese island province of Taiwan, which calls itself the Republic of China (ROC).

Only 18 of the world’s 195 states recognize the ROC. That number was 20 until May 1, when Haiti’s neighbor, the Dominican Republic, cut its diplomatic ties with Taiwan and recognized the People’s Republic of China, which is gradually isolating the wayward province. Burkina Faso followed suit on May 24th.

Moïse’s eight-day trip to Taiwan, where he has been lavished with banquets, a 21-gun salute, pomp, and ceremony by ROC president Tsai Ing-wen, is a junket of desperation: Taiwan’s rump government is desperate to keep Haiti among the dwindling number of states that recognize it, and the politically-flailing Moïse regime is desperate to come up with some quick cash to keep afloat the Haitian economy that it is sinking through negligence, corruption, and neoliberal subservience.

After the Chinese Communist Party, led by Mao Zedong, seized power in China in October 1949, the Kuomintang of dictator Chiang Kai-shek fled to Taiwan (formerly Formosa) and established the “exiled” ROC, under the protection of the U.S. 7th Fleet stationed in the Taiwan Strait. Under U.S. aegis, the ROC was a United Nations member state and even occupied a permanent Security Council seat until 1971, when the United States, under U.S. President Richard Nixon, recognized Mainland China. Taiwan’s star has been setting ever since.

Despite its formal demotion, Taiwan is still a vassal state of Washington, which continues to offer the island advanced weapon systems such as submarine technology and new F-35 Stealth fighter jets. The ROC does not recognize North Korea, nor the State of Palestine. It does, however, recognize another Washington creation, the State of Kosovo, which is neither a UN member or observer state.

The Chinese government strongly protested after President Donald Trump received a controversial phone call from the Taiwanese president to discuss what he called the “the close economic, political, and security ties between Taiwan and the U.S.,” allowed her to visit Hawaii, and stepped up high-level diplomatic meetings between U.S. and Taiwanese officials.

Haiti is one of only six nations with a population over two million which recognize the ROC. The other five are the Latin American nations of El Salvador, Guatemala, Honduras,  Nicaragua, and Paraguay. The other 12 ROC-recognizing states are the tiny nations of Swaziland, Kiribati, the Marshall Islands, Nauru, Palau, the Solomon Islands, Tuvalu, Saint Kitts and Nevis, Saint Lucia, Saint Vincent and the Grenadines, and Belize, along with the Vatican City.

While in Taiwan, Moïse has been meeting with Taiwanese capitalists, attempting to lure them into investing in Haiti. He visited power companies and rice farms, as well as the “Child Welfare League Foundation” and “Committee of Women’s Rights Promotion.”

So far, Taiwan has only offered Haiti a loan of $150 million to “electrify all of Haiti,” according to Haitilibre.com. A year ago, Moïse promised to build a new energy grid to provide electricity to Haiti 24 hours a day within 18 to 24 months. Even if the loan materializes, it seems doubtful this promise can be kept.

Meanwhile, the Taiwanese offer pales against the $4.7 billion which China offered Haiti to completely overhaul Port-au-Prince’s crumbling and nonexistent infrastructure, from roads and bridges to electrical grids and water systems. China’s proposal is part of its global “One Belt, One Road” initiative, which has been acclaimed in Africa and Latin America. Whether to curry favor with Washington or get cash as quickly as possible, Moïse has instead chosen to throw his lot with Taiwan.

It’s a policy of Taiwan to bribe political leaders of Third World countries, especially small island nations in the Caribbean and Pacific, to maintain diplomatic relations.

“It’s no surprise,” said former Haitian Ambassador Benjamin Dupuy, who was a special envoy heading an official Haitian delegation to China in May 2003 to explore establishing diplomatic relations under President Jean-Bertrand Aristide. “Jovenel is just a puppet of the U.S., which has always supported Taiwan since its inception. It’s a policy of Taiwan to bribe political leaders of Third World countries, especially small island nations in the Caribbean and Pacific, to maintain diplomatic relations.”

On his 2003 trip, Dupuy discussed with Chinese officials a host of projects including “to reforest the island, making prospections for petroleum and natural gas, and also, in the area of agriculture, to develop bamboo plantations to reverse Haiti’s deforestation.”

Following Dupuy’s delegation, 15 experts from China visited Haiti in December 2003 and met with many of Aristide’s ministers. “But two months later, as we know, came the February 2004 coup,” Dupuy said. “So this move towards China by Aristide may have had something to do with the second coup d’état against him.”

Washington Republicans have been cheering Moïse’s outreach to Taiwan. “One dollar investment from Taiwan is better than $3 of investments from China,” said Sen. Marco Rubio (R-FL). “Three dollars of Chinese investments not only will not flow to you, but it comes with all kinds of strings attached that are going to be problematic for decades to come.”

But Dupuy argues the opposite. “China has a tremendous amount of resources in U.S. dollars,” he said. “They want to use those resources. Their role in Africa has been very appreciated and important. The way they deal with countries receiving their development projects is very different from the neoliberal policies of Washington, the World Bank, and the International Monetary Fund.”

Haitian President Gen. Prosper Avril, who came to power in a 1988 coup, visited Taiwan seeking support for his military dictatorship in January 1990. Thinking the trip “would yield millions in aid,” he instead “returned empty-handed,” reported the Jan. 22, 1990 New York Times. Two months later, he was chased from power by a popular uprising.

Also faced with growing, widespread discontent and demonstrations, Jovenel Moïse may also find that his trip to Taiwan will net him too little, too late.