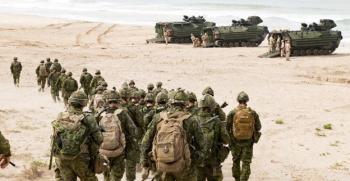 The extreme right-wing think-tank, MacDonald-Laurier Institute (MLI), continues its campaign to stir up conflict with China over Taiwan. In his latest piece for 1945, J. Michael Cole, Senior Fellow of the MLI, Global Taiwan Institute, and former operative for CSIS, advocates for Taiwan separation from China.

The MacDonald-Laurier Institute was founded in 2010. It has attracted a number of right-wing politicians, diplomats and intellectuals to formulate ultra-right-wing polemics to try and influence Canada’s foreign policy. The people attracted to join the MLI are given the title of Senior Fellows and they often have association with other right-wing institutions such as the Munk School of Global Affairs. Besides Cole’s links to CSIS, others also have association with Canada’s security establishment, like Charles Burton, Sr. Fellow of MLI and previously worked for the Security Communications Establishment as well as a former counsellor in the Canadian embassy in Beijing.

The Canada Files’ articles have revealed that the MLI receives its funding from various corporate sources like the Charles Koch Foundation. Another article by TCF Editor-in-Chief, Aidan Jonah, exposed the financial support of the Taipei Economic and Cultural Office in Canada to the MLI. For the last 4 to 5 years, The MLI Senior Fellows have been pushing the Taiwan “independence” narrative to split the province from China.

In true fashion of the Japanese militarists and US imperialists, Cole spins a revisionist history of Taiwan, as deserving of “independence.” The island was settled by its indigenous people over 5,000 years ago. Chinese from Guangdong and Fujian provinces began migrating to the island in the 13th century. The Ming Dynasty (1368-1644) incorporated Taiwan into China proper. After fighting off attempts by the Dutch and the Portuguese to colonize the territory, the Qing Dynasty (1644-1912) consolidated its hold in Taiwan, until it lost control to Japan after the first Sino-Japan War in 1895. When Japan was defeated in World War II, Taiwan was returned in 1945 to the Republic of China under the Kuomintang government at the time. When the KMT lost the civil war to the Communists, it fled to Taiwan in 1949 and set up its ROC government on the island. The ROC was internationally recognized as the government of China until the United Nations voted to recognize the People’s Republic of China in 1971. The UN General Assembly Resolution 2758 recognizes that there is one China and Taiwan is a province of China.

Today, Taiwan has a population of 24 million, out of which are 800,000 indigenous peoples (3% of the population). Even after 75 years of anti-communist and pro-Western education and culture, recent polls (June 2022) show hesitancy of the Taiwanese for independence from China. The polls show that 56.9% of Taiwanese favour the status quo. 25.2% are for the status quo towards independence. 6.3% want the status quo towards reunification with the mainland. Only 5.1% want independence as soon as possible and 1.3% want reunification as soon as possible, with 5.2% undecided. The results are not surprising given the constant barrage of anti-China war propaganda from the Taiwan and Western media stirring the pot for a Chinese military invasion.

Cole’s article offers nothing more than an ideological slant to the results of the polls. He pitches that Taiwanese do not want to live under an ‘authoritarian’ regime (who does?). Cole brings out the same line-up of issues to demonstrate the ‘repressive’ atmosphere of the Chinese government, Hong Kong, Uygurs, and Tiananmen. Given the complexity of the Taiwan situation with the mindset of the Taiwanese people conditioned by 75 years of Western thought, it will be a perilous road to reunification. The Chinese people have demonstrated that they are able to overcome Western meddling in Tiananmen, Hong Kong and Xinjiang. Taiwan will not be an exception.

There is a cultural and historical affinity between the people of Taiwan and the mainland. Even the language is the same, Mandarin. In Cantonese speaking Hong Kong, even with the 150 years of British colonial occupation, British superstructure, and educational system, people’s mentality from a Western orientation is changing to a patriotic outlook after 25 years of reunification with China. As in Hong Kong with the “one country, two systems” concept, the road to a peaceful reunification lies in the freedom of exchange between Taiwan and the mainland. In this writer’s opinion, cultural, educational, and economic exchanges between the people will lead to greater understanding of the two systems and make it easier to reunify peacefully into one country. The past economic advantage held by Taiwan no longer exists, as mainland China now offers Taiwanese many economic, social, and cultural opportunities for their livelihood. Across the Strait, a co-dependence of the economies has naturally developed over the years.

Huang Chih-Hsien is one of the few journalists in Taiwan who speaks in support of reunification with China under the “one country, two systems” concept. After her June 2019 participation in the 11th Straits Forum in Fujian where she called for "Taiwan to be returned to China," her cable TV talk show on CtiTV (中天) was yanked off the air, allegedly due to pressure from Taiwan President, Tsai Ing-wen. Public debate on reunification is an arduous one, as the pro-US mainstream media provides little space for the “return to the motherland” forces.

US Military Provocations to Cause Division and Conflict

The intricacy of the Taiwan reunification with the mainland is made the more treacherous by the military bluster of the US and its allies including Canada. US is stoking war with China via Taiwan, with people like Cole calling for Taiwan “independence.” Despite the belligerence of the US, Xi Jinping’s speech commemorating the 110th anniversary of the overthrow of the Qing Dynasty which led to the founding of the ROC, called for a peaceful reunification with Taiwan and noted that China is determined to reunite the province with the rest of the country. The Western alliance paid no heed to this statement of peace and continues to play up conflict with the tale that Taiwan is in danger of a military invasion from China. This warmongering narrative is constantly encouraged in the pages of the MLI journal to get Canada to violate the “one-China” policy and support Taiwan separatism.

The American military-industrial complex is making big money by the US provoking military tension with China over Taiwan. Although Taiwan does not have any defense agreements with the US, it has always relied on the Americans for armaments and training. Biden, in his usual foot in mouth, responded to reporters about the possible invasion of Taiwan by China, “We will defend Taiwan.” Since 2010, the US has sold more than $23 billion in arms to Taiwan. Year to date 2022, the US weapons sale to Taiwan is so far $1 billion. Over the years, successive US administrations have pressed Taiwan to modernize and re-arm its military. The Taiwan military is slated to receive the hi-tech, high precision HIMARS artillery system which has been used with effectiveness against the Russians in Ukraine.

High Mobility Artillery Rocket System (HIMARS) is a light truck mounted multiple rocket launcher made by US weapons giant Lockheed Martin. It could be configured to have a range of up to 500km. This range gives the missiles capability of striking China’s mainland across the Taiwan Strait which is 130km to 400km from its narrowest to its widest points. The US is provoking military confrontation by providing Taiwan with offensive weapons with ability to strike the mainland.

RIMPAC, an ecological disaster and a threat to peace

RIMPAC 2022 is the biennial war games exercise conducted by the US in the Pacific Rim. This year the US has invited 26 nations with 25,000 personnel for the 28th edition of the exercise which is conducted around the Hawaiian Islands and Southern California, 29 June to 4 August. In the words of the US navy, “RIMPAC exercise aims to provide training opportunity to the participants for sustaining and fostering the relationships critical for the safety and security of sea lanes and interconnected oceans. The participating forces will carry out a variety of missions including disaster relief, sea control, maritime security operations and other complex warfighting.” China was invited to participate in the 2014 and 2016 exercises but was disinvited in 2018 when the US ramped up its Cold War against China.

Canada is one of the 26 nations invited, along with other NATO countries like UK, France, Germany, Netherlands, Denmark, as well as the countries in the QUAD, AUKUS and other countries that the US wants to use to contain China. The last word to the US Navy: “RIMPAC 2022 will involve a network of partners training together to strengthen the collective forces and promote an open and free Indo-Pacific region.”

The long-term US provocation in the Taiwan Strait continues unabated. Canada joins this provocation with navy frigates HMCS Nanaimo, Ottawa, Calgary, Winnipeg and Regina; which are some of the vessels that routinely sail through the Taiwan Strait, sometimes alone and sometimes within US naval exercises. Under the banner of “freedom of navigation” by invoking the Law of the Sea Treaty, which the US has not ratified, the Americans with their NATO allies have menacingly sailed their armadas through the Strait. China has rejected the US claim that the Strait is “international waters.” The Strait with an average width of 180km can be claimed by both Taiwan and China to be within their sovereignty.

The Chinese Foreign Ministry spokesman, Wang Wenbin, said that there is no such thing as “international waters” as UNCLOS (UN Convention on the Law of the Sea) defines the area beyond the Exclusive Economic Zone (EEZ) as the high seas. “It is a false claim when certain countries call the Taiwan Strait ‘international waters’ in order to find a pretext for manipulating issues related to Taiwan and threatening China’s sovereignty and security.” The so-called “rules-based” countries like Canada and the US continue to violate China’s sovereignty by their military maneuvers in the Taiwan Strait.

The North Atlantic Treaty Organization is engaging in a de-facto expansion into the Pacific, as Australia, Japan, New Zealand and South Korea were invited to attend the June Madrid NATO meeting for the first time. The US is doing in the Asia Pacific what it has done in Eastern Europe – to create military alliances to threaten its perceived adversaries. This time, their warlike focus is on China and the Democratic People’s Republic of Korea.

Global Affairs Canada, CSIS, MLI, and mainstream media are the tools of the military industrial complex, and the political establishment to keep Canadians at a heightened state of insecurity for conflict with China. Peace loving Canadians will have to speak up and take action to prevent military confrontation in the Asia Pacific by NATO.

William Ging Wee Dere is the author of the award-winning “Being Chinese in Canada, The Struggle for Identity, Redress and Belonging.” (Douglas & McIntyre, 2019). He was a political organizer and a leading activist in the 2-decade movement for redress of the Chinese Head Tax and Exclusion Act.