My Haitian friend is determined to give his country the building blocks for a better future. Literally 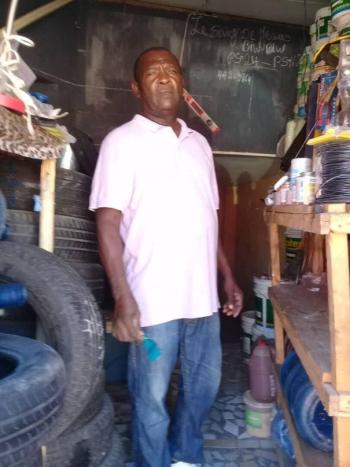 It’s 8:20 a.m. and I’m slipping into my street clothes after a masters’ swim workout at the McGill University pool when my phone buzzes.

It’s Madsen on WhatsApp from Port-au-Prince, the capital of Haiti.

This is good news. Still in the locker room, I call right back.

I hear cars honking and passersby speaking Creole on the crowded sidewalk just outside Madsen’s one-room shop in Delma 60, a tight-knit neighbourhood in the heart of Port-au-Prince.

The tiny shop is where Madsen makes his blocks one by one: three shovelfuls of sand for every one of cement powder, mixing in water he’s hauled up in a pail from a well down the hill. He scoops the mix into a foot-long wooden mould sitting on the ground and shakes it a few times to get rid of the air bubbles, then slides out the damp block. Block after block after block are lined up to dry in the sun in a vacant lot nearby.

Here’s how In the Blood of Jesus Solid Cement Blocks came to be.

When I retired from my job as a radio documentary producer for the CBC program “The Sunday Edition” last fall, I mentioned to host Michael Enright and other colleagues that I would finally have free time to help out the Merisiers, my adopted Haitian family — to find a way of creating a few jobs instead of just sending them a little spare cash a few times a year.

During my Zoom retirement party a few weeks later, my colleagues announced they had collected $5,000 for a project.

Twenty years ago, I made a documentary about members of Montreal’s Haitian community who sent money to their families back home. Remittance accounts for one-third of the Haitian economy — more than $4 billion (U.S.) a year. At the time, Madsen’s older sister Anita was working for minimum wage sewing quilts in a Montreal factory. Every month, Anita transferred a quarter of her hard-earned pay to Haiti. I took my tape recorder to Port-au-Prince to follow the money from Anita’s purse to Madsen and his wife Nadine’s kitchen table. Twenty people had daily meals of rice, chicken or pasta cooked over a charcoal fire, thanks to Anita’s diligence.

A decade later, on Jan. 12, 2010 at 4:53 p.m., the Merisier family’s two-storey cement-block house shook like crazy. Blocks cracked and the walls leaned in, but the roof didn’t fall. Madsen, Nadine and the children escaped into the street, held hands and prayed. More than 100,000 Haitians were killed and thousands more maimed, caught under cement-block walls that disintegrated in the catastrophic earthquake.

The CBC sent me back to Haiti. Port-au-Prince was unrecognizable: piles of grey rubble, from the top of the mountain to the sea.

I found the Merisiers, safe in a Red Cross canvas tent, lined up on the ground at night like canned sardines to sleep.

During the day, Madsen was my guide. As we walked by collapsed buildings, he’d pick up pieces of crumbled block and smash them together. They broke into even smaller bits. “Too much sand,” he’d say, “not enough cement powder.

“Cement costs much more than sand, so when people make blocks they use as little as they can — barely enough to hold the blocks together. When Haiti rebuilds, we have to rebuild safer.”

In the months following the earthquake, governments and aid organizations promised to invest upwards of $13 billion (U.S.) to rebuild Haiti. Most of that money never came. To quote Greta Thunberg on the promises of world leaders, it was just more “blah blah blah.” I lost my long-held belief that donating to international aid organizations was a responsible way to help citizens of the Global South lead better lives.

And so the idea of helping one family directly to rebuild their future was born. A decade and a few thousand WhatsApp messages later, Madsen is now the owner of Le Sang de Jésus Solidité Bloc Ciment ect., trying to reconstruct his country, one solid block at a time.

My friends’ and colleagues’ generous donations helped him get his business going. My relationship with him now is all about figuring out how to help that business grow.

It’s been a ride.

Truckers bringing in cement powder from the neighbouring Dominican Republic regularly get robbed at gunpoint. Madsen prepaid $1,000 (U.S.) for 200 bags that never arrived. I spent hours on the phone with a Haitian cement salesman, begging him in my broken Creole to honour his verbal contract. Madsen prayed. A few weeks later, a truck pulled up with the bags.

Even at the best of times, rich Haitian elites who control the cement imports from the United States make it difficult for small shops to get supplies at an affordable price. Now, the COVID-19 pandemic has broken global supply lines, and there is a worldwide shortage of cement. Haiti is not just the poorest country in the western hemisphere, it is also the last place a shipper wants to send their cargo.

Madsen got excited when I told him I had found a hand-operated block-making machine made in South Africa that was perfect, guaranteed to make extremely solid blocks. I told the salesman in Port Elizabeth I was ready to transfer him the money to have the machine shipped to Port-au-Prince. But when he heard the destination, he told me he would rather not take my money.

“We’d put it in a container and ship it, and it would arrive in Port-au-Prince in a few weeks. But your man Madsen would likely never get it,” he said.

“There are so many corrupt customs agents at that port,” he replied. “I’m very hesitant to sell you a machine that will probably disappear without a trace.”

“Les problèmes graves de mon pays me stressent beaucoup,” Madsen messaged me on WhatsApp, in response — “My country’s serious problems are causing me so much stress.” When he’s not at the shop or at home or in church, Madsen is at the pharmacy, buying pills for head or stomach aches.

Then came the assassination of Jovenel Moïse, the Haitian president, last July. Madsen is now afraid to venture more than a few blocks from home. Gangs control the streets, killing and kidnapping at will. This fall, Jimmy “Barbecue” Cherizier blocked fuel supplies that had arrived in port, proving he is more powerful than elected officials and the police.

Despite the pitfalls and temporary closures when the shelves are bare or the streets too dangerous to venture out on, Le Sang de Jésus is starting to be known in Delma 60. Madsen’s prices are the same as the competition’s, but his blocks use the recommended amount of cement and are not cut with chalk or dust. They are blocks made to save lives.

Le Sang de Jésus is also slowly turning into a hardware store: Madsen now sells jugs of “dlo” — de l’eau, or clean drinking water — along with light bulbs, hammers, paint, and iron rebar used to stabilize block walls. There is wire, too, so households can hook themselves up to electricity poles.

When Madsen and I first started talking about opening the shop, he wanted to call it Le Bloc Solidité David. “No, no, Papa Boss,” I said. “We must name it after an important person — you.” On opening day, Madsen sent me two photos: the first, a beaming selfie in a room piled high with cement bags, and the other, that surprise yellow sign where Jesus is front and centre, promising to build Haiti back and better, one solid block at a time.

If you are in Port-au-Prince, note the address: Le Sang de Jésus Solidité Bloc Ciment ect, Quartier Delmas, 60 Musseau (before the dead end). Madsen Merisier would be pleased as punch to show you around.

David Gutnick recently retired from CBC radio where he was a broadcaster and documentary producer for 36 years. He is most recently the author of the children’s book Mr. Mergler, Beethoven, and Me. He lives in Montreal.