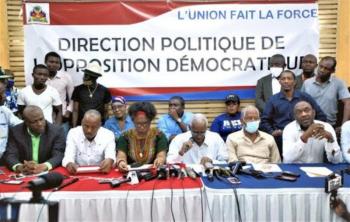 In a note sent to AlterPresse, several political parties, trade unions, and popular organizations are demanding that the National Transitional Council (CNT), resulting from the Montana Accord, choose a new president and a new prime minister before Monday February 7, 2022, who have enough legitimacy to lead the country.

Supporters of the Montana Accords, including the Socialist Alternative (l’Alternative socialiste - ASA), the Freedom of Equality Movement of Haitians for Fraternity (le Mouvement de liberté d’égalité des Haïtiens pour la fraternité - MOLEGHAF) and the Central national of Haitian workers (la Centrale nationale des ouvrières et ouvriers haïtiens - CNOHA) say "the CNT will have to combat the climate of fear cause by armed gangs, take measures against hunger and unemployment."

These organizations encourage all relevant sectors to "mobilize across Haiti to overthrow the current de facto government, supported by the international mafia".

They advocate a transition of rupture with the regime of the ruling PHTK (Parti haïtien tèt kale) in power.

They call for continuing the battle against the interference and influence of foreign countries, especially the United States of America, in Haitian affairs.

They say American diplomats and the United Nations must stop choosing, in place of the Haitian people, who should lead the country.

The CNT has begun the process to set up a new team, led by an interim president and a prime minister, outlined in the Montana Accords.

Since November 24, 2021, the de facto prime minister, Ariel Henry, has appointed new cabinet ministers, and has created the “September 11, 2021 Accord”, signed by several political organizations and parties.

The establishment of Henry’s new de facto government is seen as a sharing of power between the PHTK and members of the parties who have supported Henry’s "September 11th" Accord.

More and more voices are demanding that Prime-Minster Ariel Henry step down before February 7, 2022. While others are pushing for elections this year.

Translated to English by CHIP editors