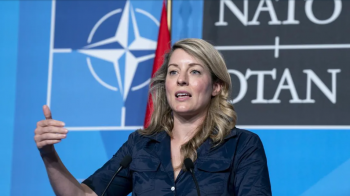 At the recent Madrid Summit, the North Atlantic Treaty Organization (NATO) released its new strategic concept. It is the first update of the transatlantic alliance’s principles and purpose in 12 years.

The NATO Secretary-General Jens Stoltenberg called it the most significant transformation of the alliance since the end of the Cold War. U.S. Secretary of State Anthony Blinken described it as “the blueprint for how we will approach the world together.”

All 30 members the alliance including Canada approved NATO’s 2022 Strategic Concept.

Yet, it’s a dangerous plan to preserve Western domination through greater militarism and division. As the 13-page concept explains, the Euro-Atlantic alliance is preparing for combat and competition in a “contested and unpredictable world.”

With a “360-degree approach,” NATO is extending its operating domains beyond land, air and sea to information, cyber and space. .”

NATO’s rapid reaction force will increase from 40,000 to 300,000 troops and more ammunition will be pre-positioned in Eastern Europe. Sweden and Finland, which share a maritime and a land border respectively with Russia, will join the alliance.

At a press conference in Madrid, Defence Minister Anand announced that Canada will bolster its troops leading NATO’s battle group in Latvia. Prime Minister Trudeau said Canada is supplying more weapons to Ukraine including sniper rifles, ammunition, drone cameras, and armoured vehicles to continue the fight against Russia “for as long as it takes.”

Nuclear-armed members, the U.S., the United Kingdom and France, are modernizing their arsenals and the new NATO-controlled Aegis Ashore ballistic missile defence systems in Poland and Romania enables a first-strike attack threatening Russia.

There was no mention in the concept or at the summit of any measures for arms control, non-proliferation or disarmament. Moreover, in Madrid, allies did not call for de-escalation, a ceasefire or a negotiated resolution to end the raging war in Ukraine.

NATO has put China directly its cross-hairs. The concept describes how the alliance will extend beyond the Euro-Atlantic region into the Indo-Pacific. For the first time, the leaders from Australia, New Zealand, Japan and South Korea attended a NATO Summit and described China as “coercive” and “aggressive”.

Africa and the Middle East are also identified as regions where NATO will have a greater presence to counter “terrorism”. However, the subtext is that NATO will challenge China in both regions to undermine its Belt and Road Initiative, a massive infrastructure program to help poor countries develop and improve trade with Asia.

To pay for this NATO enlargement, allies agreed to invest more in NATO’s common fund and in their military budgets to meet or exceed the 2% GDP target. Yet, as the Stockholm International Peace Research Institute has reported, the thirty allies account for 60 per cent of the $2 trillion annual total for global military expenditures.

NATO’s latest defence expenditures report shows that Canada is 6th highest among all allies at $35 billion for military spending in 2022, which is a 75 per cent increase since 2014.

NATO’s new Strategic Concept is not a plan for “international peace and security”; it’s a plan to maintain the West’s power and wealth through armed force and the containment of other countries. It will divert public funds away from needed social programs like housing and healthcare to the military and the arms manufacturers.

Most troubling, NATO’s plan over the next decade will derail the United Nations’ Sustainable Development Goals and the Paris Agreement climate targets as the Euro-Atlantic allies confront other countries instead of cooperate with them on global challenges.

Canadians should reject NATO’s new strategic concept and reconsider our continued membership in this military alliance.

Tamara Lorincz is a PhD candidate at the Balsillie School of International Affairs, Wilfrid Laurier University and Researcher, Science for Peace.

“We seek lasting peace while NATO prepares for perpetual war.”

A statement from the Progressive International Cabinet at the close of the the NATO Summit in Madrid.

Between 28 and 30 June, the member states of the North Atlantic Treaty Organization (NATO) met in Spain in the context of the ongoing war in Ukraine. But rather than seeking to secure collective survival, NATO presented a dangerous vision of a polarised world that reasserts its role as a global policeman.

Over years and decades, NATO’s mandate has stretched to accommodate the expansionist ambitions of its founders. NATO formed in 1949 with the mission of “deterring Soviet expansionism, forbidding the revival of nationalist militarism in Europe through a strong North American presence on the continent.” When the Warsaw Pact dissolved in 1991, NATO did not disband, but rather US strategy resolved to prevent “the re-emergence of a new rival, either on the territory of the former Soviet Union or elsewhere.”

Its 2001 invasion of Afghanistan, an “out of area” military operation that lasted 20 years, killed hundreds of thousands of civilians and forced millions to flee their homes. That war left a legacy of profound poverty, hunger, displacement, and instability in its wake. According to the United Nations, Afghanistan now faces “universal poverty” amid a total collapse of its developmental and humanitarian capacities.

NATO’s war in Libya saw open-air slave markets reappear in a nation that once boasted Africa’s highest Human Development Index. That destruction poured fuel on the fire of militancy and conflict in the nearby states of Mali, Algeria and Niger. This proliferation of violence has seen NATO move further afield through formations like the African Standby Force.

Today, NATO arms and trains forces in Morocco, sustaining not only its violent occupation of Western Sahara, but also securing its role as the lynchpin of European border security. On 25 June 2022, Moroccan security forces massacred dozens of refugees as they sought to enter the Spanish enclave of Melilla. Under NATO’s supervision, Europe’s externalised borders have become weapons against those who seek refuge.

NATO’s expansion has also provided a blanket of impunity for member-state Turkey. With generous political and material support from the United States and other NATO countries, the government of Recep Tayyip Erdoğan has repeatedly violated international law in his assault against the Kurdish people. Now, Turkey is launching new military offensives at its borders — to silence or tacit approval from its NATO partners.

NATO gathered this week under the auspices of responding to Russia's violent escalation of the war in Ukraine. But its ambitions reach further than regional defence. At the Madrid Summit, it named China as a long-term threat, promising to deepen cooperation with countries like Australia, Japan, New Zealand and the Republic of Korea, the latter of which appeared at the NATO Summit for the first time in history — a clear pivot of the military alliance from the Atlantic to the Pacific. The vision of “Global NATO”, first articulated in 2006, is fast becoming a grim reality for billions of people for whom the costs of war are carved from the imperatives of survival.

NATO policies not only devastate those they maim or kill. They also inflame crises of climate, health, and hunger. For the first time in history, the world spent over $2 trillion on weapons in 2021, with the United States accounting for 40% of the total. In Europe alone, NATO has now committed to increasing its rapid response force nearly eightfold — to 300,000 troops.

Meanwhile, the world teeters on the brink of famine — and even citizens in Europe and the US face a winter of hunger as military and economic escalation take their toll. Weapons of war cannot fill empty stomachs. They cannot heat homes. They cannot repair a dying planet. And they cannot end pandemics.

Countries across the planet recognise the peril of a new Cold War. Nobody dares to envision the implications of a direct NATO confrontation with Russia and China. But a new Cold War also threatens to turn third nations into sites of indirect proxy conflict, creating new ‘sacrifice zones’ in the name of security for those who are last to bear the brunt of war.

Lasting peace can only be won by a common security framework that does not allow for the domination of one country by another, or one bloc over any other — but rather succeeds to demilitarise the planet, fight its poverty, and pool common resources to secure social and environmental justice. In standing against these existential priorities, NATO has revealed a preference for domination over the imperative of our survival.