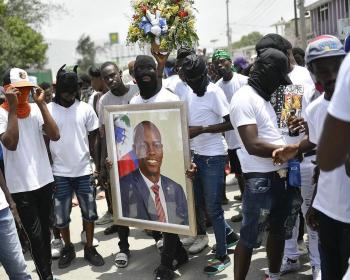 A Haitian justice official has appointed a new judge to oversee the investigation into the killing of President Jovenel Moïse, acting more than a week after his predecessor withdrew from the case and as the country struggles with recovering from the devastating magnitude 7.2. earthquake that killed hundreds and injured thousands.

Magistrate Bernard Saint-Vil, dean of the Court of First Instance in Port-au-Prince, confirmed Monday to The Associated Press that he chose judge Garry Orélien to be in charge of the case.

Orélien replaces judge Mathieu Chanlatte, whose resignation from the case was announced Aug. 13. Chanlatte cited personal reasons without giving more information, but he left the post a day after one of his assistants died under unclear circumstances.

Orélien will supervise a case that it doesn’t seem close to be solved. Police have arrested more than 40 suspects, but there is no clarity about who was behind the plot to kill Moïse on July 7. Among the detainees are 18 former Colombian soldiers and 20 Haitian police officers.

Also on Monday, Public Security Minister Rockefeller Vincent requested in a letter to the National Police that the Colombians be held in cells away from other detainees to minimize risks, although he didn’t elaborate.

The earthquake that struck Haiti’s southwestern peninsula July 14 killed more than 2,000 people, according to authorities, and it had distracted national and international attention away from Moïse’s assassination. While Haitians work to recover from the disaster and look for the Moïse investigation to advance, the country also is expected to hold a presidential election Nov. 7.