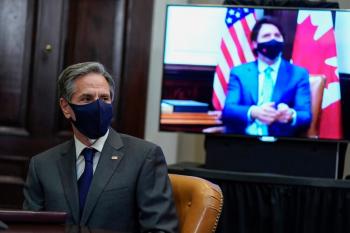 After Canada’s Foreign Affairs Minister Marc Garneau and new US Secretary of State Antony Blinken held their first bilateral meeting Global Affairs’ release mentioned China, Iran, Venezuela, Cuba and… Haiti. The first four nations are all in the crosshairs of Washington and Ottawa. But Haiti’s de facto president is in the opposite position. Jovenel Moise would fall quickly if the US and Canada withdrew their support.

What does it mean that a supposedly ‘unimportant’, impoverished, nation is the only non-enemy government mentioned by those in charge of US and Canadian diplomacy? Is it a recognition that their Haitian puppet might fall or is it a backhanded compliment to the anti-dictatorship movement? Or maybe it reflects the US and Canada’s commitment to credible elections?

Since Jovenel Moise extended his mandate extra-constitutionally on February 7 there has been a wave of criticism against US and Canadian policy in Haiti. The country’s heterogenous opposition have vociferously condemned the foreign powers. In the US there have been a number of rallies and online actions. A number of Democratic party senators and congresspeople have also called on the Biden administration to stop propping up Moise. In Canada three current MPs and three former MPs, as well as Noam Chomsky, David Suzuki, Naomi Klein and 500 others, signed a letter criticizing Ottawa’s “support for a repressive, corrupt Haitian president devoid of constitutional legitimacy.” A coalition of 30 Haitian Canadian groups, as well as the Canadian Labour Congress and Council of Global Unions, have also expressed opposition to Canadian and US policy in Haiti.

Blinken and Garneau are undoubtedly feeling some pressure. At the same time, however, the situation on the ground is fluid and if they want Moise to remain it is imperative to express their diplomatic backing.

The post Blinken/Garneau meeting release noted that the two discussed a desire “to ensure the upcoming electoral process in Haiti is credible, inclusive and transparent.” But Haiti’s opposition has already rejected elections under Moise, which few will consider “credible”. In the summer Moise pushed out the entire electoral council and appointed a new one in contravention of the constitution.

The Canada-US position ensures the opposite of their stated aim. By supporting Moise as he extends his mandate, rewrites the constitution, criminalizes protests, sets up a new intelligence agency, instigates a gang alliance to terrorize the slums, etc. they are guaranteeing that forthcoming elections won’t be credible. But concern for credibility has not been a defining feature of Ottawa and Washington’s response to Haitian elections over the past 20 years.

After Fanmi Lavalas won more than 70% of 7,000 mayoral, senatorial, etc. positions in 2000 the US and Canada undermined what OAS observers initially called “a great success”, probably Haiti’s most credible ever election. Realizing there was little chance Fanmi Lavalas would be defeated at the ballot box in the foreseeable future, they suddenly claimed the previously employed method to determine whether a runoff was to be held in a handful of Senate seats made the election “deeply flawed”. A few years later they overthrew all the elected officials.

After a two-year coup government repressed pro-democracy forces, the US and Canada financed elections that blocked the most popular political party from participating. On simple procedural grounds the election was also dubious. During the election in 2000 there were more than 10,000 registration centres and some 11,000 polling stations across the country. In 2006 the coup government reduced that number to 500 registration centres and a little more than 800 polling stations, even though they had some $50 million to run the election (mostly from the US, Canada and France). In the poorest neighborhoods, where opposition to the coup was strongest, registration centres were few and far between.

At the last minute former president René Preěval entered the race. The coup government sought to block Preěval from winning in the first round and the head of the International Mission for Monitoring Haitian Elections, chief electoral officer of Elections Canada Jean-Pierre Kingsley, ardently supported the effort. After an explosion of protest following the discovery of thousands of ballots burned in a dump, the US, French and Canadian ambassadors — who initially insisted the electoral council continue counting votes to force a second round — reluctantly agreed to negotiate with their counterparts from Brazil and Chile, as well as the UN and others to grant Preěval a first-round victory. But they used the negotiation to cast doubt on the legitimacy of Preěval’s mandate, even though he likely won 60% of the vote.

Not viewing Préval as sufficiently compliant, the US and Canada pushed for presidential elections months after the devastating 2010 earthquake and amidst a deadly cholera outbreak. Following the first round of voting, Canadian and US officials forced the candidate whom Haiti’s electoral council had in second place, Jude Celestin, out of the runoff. According to the official results, Mirlande Manigat received 31% of the vote, Celestin 22% and Michel Martelly 21%. With no statistical rationale they removed votes from Celestin, who was allied with Preěval, until Martelly was in second place.

Through Martelly’s term he failed to hold legislative elections and ruled by decree. That didn’t stop the US and Canada from supporting the corrupt and thuggish former Ton Ton Macoute. After repeatedly postponing elections Martelly held a poll marred by fraud in 2015. A subsequent audit found that 92% of polling place tally sheets had significant irregularities and 900,000 of the 1.5 million votes cast for president were from accredited poll observers who could vote at any voting station. Despite mass protests against Martelly’s handpicked successor Moise first round lead, the US and Canada pushed to move forward with the second round of the election as if the first round of voting was legitimate. Riots ultimately forced the cancellation of the second round. In a subsequent redo Moise ‘won’ an election with few participating.

While the US and Canada claim to support democracy and fair elections in Haiti, history proves otherwise. In reality neither government seems to care about the wishes of ordinary Haitians.