The powerful businessman of Jacmel Joël Khawly, arrested for illegal possession of weapons 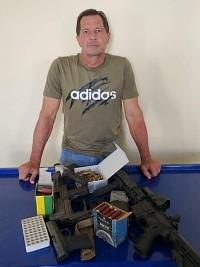 On Friday, November 25, shortly before midnight, agents from the Office for the Fight against Drug Trafficking (BLTS) and the Central Directorate of Judicial Police (DCPJ) arrested the powerful Jacmelien businessman Joël Khawly CEO of Khamaco S.A., importer of cement in the great South which also controls a good part of the trade of fuel, he would also be one of the owners of a private port in the commune of Carrefour (Thor 14).

Back to the facts :
Following information concerning an alleged shipment of drugs landed the night before in Marigot on behalf of Joël Khawly, BLTS/DCPJ South agents searched several spaces in the jurisdiction of Jacmel, including the "Club Ma Folie" and the residence of Joel Khawly located on the heights of Cap des Maréchaux in Jacmel.

After 6 hours of search in the residence of Khawly in the presence of the Justice of the Peace of Jacmel Fritz Palanquet, no drugs were found but war weapons and ammunition...

Miscellaneous :
A GLOCK 17 FXL 824 Series 9mm Caliber Pistol and two loaded magazines: one magazine with 14 rounds and the other with 16 rounds of 9 mm caliber.
3 tear gas canisters, two of which are CS and another is 112CN.
2 boxes of cartridge 12 including one of 17 cartridges and the other of 25 cartridges.
1 telescopic baton

Joël Khawly was arrested for "possession of illegal weapons" and transferred by air to the DCPJ in Port-au-Prince where he is in police custody for legal action.