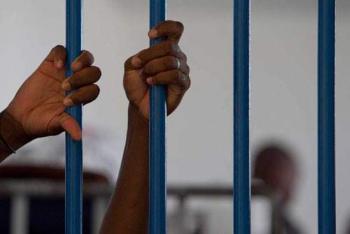 The collective of lawyers for the defense of human rights (CADDOH), denounces the conditions of detention in the country's prison centers, in particular at the National Penitentiary.

"The detainees are deprived of medical care for lack of drugs and materials at the clinic of the largest prison in the country," protested the spokesperson for the collective, Me Arnel Rémy.

The lawyer criticizes the officials of the Prison Administration for the poor quality of food provided to detainees. For the lawyer, more than 11 thousand people are incarcerated in the various countries of the country. He believes that prolonged pre-trial detention is increasingly swelling the prison population.

In addition, the human rights activist draws the attention of health authorities to the potential risk for prisoners of being infected with Covid-19.

To corroborate his claims, he referred to the death of Gilbert Dragon at the National Penitentiary. Officials say his death came from complications from the Coronavirus.

In addition, referring to the case of political prisoners, Arnel Rémy said that almost all the formalities have been completed for the hearing of Abelson Gros Nègre's case before the Court of Appeal of Port-au-Prince .
"We are only waiting for the order of the Presidency of the Court to put the case in order," said the spokesperson for CADDOH who also expressed his concerns about the vacuum that the departure of 10 will leave. investigating judges whose mandate will expire shortly.

"It is up to the President of the Republic to initiate the process of appointing these magistrates", underlined Me Rémy adding that the Prime Minister does not enjoy this constitutional prerogative.

Since the sudden death of Jovenel Moise on July 7, the presidential chair has remained empty. Sectors of national life require the establishment of a two-headed executive arguing that Prime Minister Ariel Henry can no longer ensure the governance of the country.
The latter has already set up a new ministerial cabinet whose members are already known behind the scenes. The publication of the decree to ratify the next government is imminent.