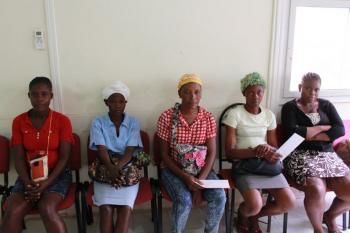 Youlette (whose name has been changed to protect her privacy) was a woman in her 30’s, newly married, when she arrived at the cancer program offices that Dr. Joseph Bernard works from in Port au Prince, Haiti.

The day was very much like any other for the program that provides cancer care services: There were approximately 20 patients to be seen that day, some of them program patients in the midst of their chemotherapy. Others were like Youlette, women seeking treatment without understanding the cause of their ailment.

The women who show up at the Innovating Health International (IHI) offices, the not-for profit organization where Bernard is the primary oncologist, are frequently referred from other physicians who suspect breast cancer but lack the capacity to diagnose and treat it. Often these women know why they are being referred but sometimes they do not. They only know that the mass growing in their breast is painful and negatively impacts their daily lives as they care for their families.

After sitting down for a preliminary assessment, Bernard took a biopsy of Youlette’s affected breast and sent off standard labs he requires for any patient potentially undergoing treatment. He was certain it was cancer, and likely advanced stage, but what he found was not something he, or Youlette, was prepared for.

It was indeed have cancer, stage IV, the most advanced stage and not survivable, but Youlette was also HIV-positive and likely pregnant.

21.7 million new cases and 13 millions of deaths are predicted by 2030 as the population ages.

Of that, breast cancer is by far, the most common cancer and most common cause of cancer-related death among women worldwide with trends in incidence and also mortality on the rise, specifically in less economically developed countries, like Haiti. The implication here is that women in less economically developed countries do not have the access to treatment they need.

Bernard says half of the patients he treats are under the age of 50 and arrive with advanced stage cancer. For comparison, in the United States the average age of diagnosis is 63 and women typically present in the earliest stages of the disease. While it is unclear why this is the case, this is one area where Dr. Bernard and the team at IHI are researching to find answers.

With only four facilities in Haiti that have the ability to provide chemotherapy treatment there is clearly a lack of access to care. The few laboratories functioning with the capacity to definitively provide diagnosis of cancer including grade and stage, key elements to creating a national database, are unable to meet the needs of an entire country.

This scarcity of data regarding breast cancer in Haiti is due to poor infrastructure, and because of that the true extent of this emerging crisis is still unknown. Most experts agree that they only expect the number of cases to increase over the next few years as more research can be done.

In a country of 10 million people, half of them women, Dr. Bernard estimates that there are millions of women at risk who are not even aware let alone able to seek screening and treatment services.

Dr. Bernard, a Haitian physician, first became interested in treating cancer while near the end of his medical studies at the L'Université Notre-Dame d'Haïti in Port-au-Prince. He was participating in an externship in Belgium, at which time he was able to participate for two months in the Belgian hospitals oncology services. “It was very active. You saw patients had spent years taking chemo… I really appreciated the first month.” Coming from a country like Haiti, where there are no formally trained oncologists, this opportunity was life changing.

“There’s no oncologists per se in Haiti to even train with” stated Dr. Bernard, a situation similar to many other less economically developed countries.

To that end, he decided to gain whatever training he could that might help him deliver oncology services in his home country. “I started to study cancer drugs and I was fascinated by the mechanism of action. And…I also presented on oncology in Haiti when I could. What I found though was there [is not] much information about cancer in Haiti. Most things [I found] were projections or estimations. But no good data,” Bernard said.

“I went to a conference in Miami [in 2015] just to get more knowledge in oncology because at a certain point I wanted to do a study on cancer care in Haiti.” He learned about a U.S.-based physician in Haiti who was attempting to launch a cancer care program. “I approached and told him I’m pretty interested in oncology. I mainly want to know what cancer drugs they use here in Haiti so he gave me some information. But what stuck in his head was my interest in oncology so at the second meeting I proposed to him that I would be happy to help volunteer. When I could come see patients I would. And that’s how it started.”

Through IHI, Bernard and other Haitian physicians have been able to receive intensive classroom education on breast cancer pathophysiology, presentation, diagnosis, and treatment. Additionally they are trained to use chemotherapy treatment algorithms and they receive direct supervision with the program director while initially managing clinic patients—a method of training particularly useful in a country with limited infrastructure and few resources. Using algorithms for treating something like breast cancer is similar to how HIV is treated in less economically developed countries—providing structure and a clear path that can be learned quickly and replicated easily. The results are effective.

Cancer Care for Haiti in the Future:

Bernard, a seasoned practitioner, discusses his long-term goals: He still refers to himself as a student but he hopes to create a center of excellence from his site in Port au Prince that can be replicated throughout the country. To him cancer-care treatment is attainable for the island nation, not just breast cancer but also all cancers though it will take a significant amount of time and commitment from physicians, surgeons, nurses, social workers and psychologists. Cancer care cannot be accomplished without being able to support all the needs of the patient, Bernard explains.

Youlette never came back to the IHI offices and Bernard does not know what has happened to her. He thinks about her often though, because as sad as the story is, there are so many women in the country similarly at risk and in need of help. This is one of the many stories that drive him to continue this work.