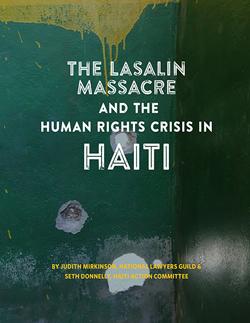 A new report by the National Lawyers Guild and Haiti Action Committee called “The Lasalin Massacre and The Human Rights Crisis in Haiti” blames the United States backed government in Haiti for bloodshed and killings in anti-government protests.

The report released July 8 accuses Haitian police and other paramilitary personnel with committing a “massacre of the civilian population” in the Lasalin community in the capitol Port-au-Prince. The protests occurred November 2018.

“In our findings we challenge the dominant narrative being put forward by the U.S. government; the puppet regime in Haiti; and much of the U.S. mainstream media,” said Seth Donnelly, one of the report’s authors to The Final Call.

He said U.S. media and both American and Haitian governments characterizing the unrest as ‘gang warfare’ obscures the reality that the attack on Lasalin was government-orchestrated and foreign supported, with police collaborating with and weaponizing criminal elements.

“The evidence of government and paramilitary collusion is clear,” the report said. Observers noted the carnage was intended to “punish and destroy” a neighborhood popular as a center of opposition politics.

Lasalin was targeted because it is a base of opposition against the Jovenel Moïse-led government and the political stronghold of the Fanmi Lavalas Party and its head,  ex-President Jean Bertrand Aristide, who was overthrown in a 2004 U.S.-induced coup. Mr. Aristide remains widely popular in the country.

“Haiti’s been under occupation by UN forces … ever since the violent 2004 coup against President Aristide,” said Mr. Donnelly.

“Following that coup there were mass killings, including massacres that were being conducted by the security forces supported by the United States, UN occupation,” added Mr. Donnelly.

In the throes of mass demonstrations in November 2018 and the brutal government crackdown, Fanmi Lavalas, in a document called “Crises and Resolution,” called for a complete change of government.

“Fanmi Lavalas Political Organization continues to stand firmly with the Haitian people to ‘chavire chodyè a (overturn the cauldron).’ No cosmetic solution will bring an effective and lasting solution to the crisis in which we are plunged. This system has run its course. It cannot be patched up. It must be changed,” the document read in part.

Some of the victims in the violence were burned alive, sexually assaulted and raped, and hundreds were forcibly displaced from homes. The report said some of the slain bodies were burned or taken away to be disappeared, buried, never to be found.

Anti-corruption marches were sparked by allegations of embezzlement from Haiti’s Petrocaribe fund, a Venezuelan aid program initiated by the late President Hugo Chavez that provided subsidized oil to Caribbean countries. The savings was to be earmarked for development programs, which never materialized.

Political opponents and demonstrators are demanding President Moise relinquish power for his alleged role in the scandal after a Haitian Senate investigation alleged misappropriation by several former officials of the previous administration of President Michel Martelly.

Mr. Martelly handpicked Mr. Moise as his successor and those named in the corruption scheme are current members of the ruling party. None have been charged or tried, said analysts.

Besides the report issuers, the United Nations, investigative journalists and other firsthand observers spoke directly to witnesses. Experts on the situation told The Final Call, the Haitian government failed to respond appropriately to the massacre which added to suspicions about their role.

“When you put it together, it’s pretty damning,” said Sienna Merope-Synge, staff attorney with the Institute for Justice and Democracy in Haiti, who interviewed witnesses in Haiti.

“In the face of that, you think well, what was the role of the government? The government has in the follow-up to Lasalin, done nothing to … ensure transparency or accountability,” said Ms. Merope-Synge.

Ms. Merope-Synge also laid culpability of problems besetting Haiti on International actors like the U.S. and the UN.

She said there are “a lot of critical problems” with the way the U.S. carried out its foreign policy in Haiti over centuries and a myriad of issues from the UN.

“The United Nations was implicated itself in Human Rights abuses over the last decade, including introducing a cholera epidemic…including sexual abuse by UN Peacekeepers, and itself hasn’t taken responsibility for those things,” Ms. Merope-Synge pointed out.

“The U.S. government has obviously, for many decades been implicated in election meddling and supporting rightwing leaders in Haiti and have prioritized short term kind of ‘stability’ in Haiti over a real representative government,” she explained.

The report authors said an investigation is imperative into the role of the U.S. embassy and government in both the election of President Moise and the ensuing corruption and human rights abuses.

Jovenel Moise came to power with the aid of the U.S. in November 2016 elections that many dismissed as fraudulent. “Despite overwhelming evidence of fraud, the U.S. State Department immediately heralded the elections as legitimate,” wrote report authors.

“The United States foreign policy toward Haiti is not democracy, but its hypocrisy,” explained Joseph Makandal Champaign Jr, Haiti representative of the Honorable Minister Louis Farrakhan of the Nation of Islam.

Mr. Champaign described U.S. Haiti policy as a “mockery” and “not respecting” the will of Haitians for leadership change. He compared the Trump administration propping up the Moise government despite  corruption allegations and rights abuses, to the U.S. actively engaging regime change in Venezuela for similar allegations.

The official position of Washington for Haiti is, change only through the “free and fair” elections, which Haiti watchers maintain has consistently failed, citing the 2016 poll that brought Mr. Moise to office.

Mr. Donnelly was part of a fact-finding delegation that travelled to Haiti to investigate what was actually happening. When asked what the takeaway from the findings should be, he said for the American public to be aware.

“We all shared the desire for the people in the U.S., to first and foremost recognize that Haiti is in the frontline global struggle against White Supremacy and imperialism,” Mr. Donnelly said.

The island nation was the first to overthrow slavery and colonialism in the Haitian revolution of 1804. Multiple messages left at the U.S. Embassy in Port-Au-Prince were not returned by Final Call press time.

The report concludes: “As the toll mounts from the atrocities committed in Lasalin, it is time for both the United States and the United Nations to be held to task for their continued support of the repressive and illegitimate regime now in power in Haiti. The people of Haiti deserve the right to live without the daily threat of state-directed violence.”

Analysts agree, for now, Haitians are still in a state of upset and on edge about a political system that has not worked for them. “It’s a very uncertain and fluid situation,” said Ms. Merope-Synge.