Sex for a job: the scandal of Haiti’s exploited US garment workers 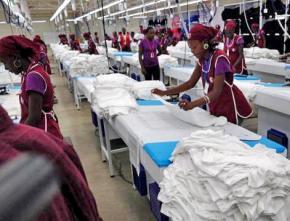 Marie says she was less than a month into her job at a garment factory in the Haitian capital, Port-au-Prince, making clothes for a range of well-known US brands, when the factory’s head of security gave her an ultimatum: have sex with him or be fired.

The 24-year-old says she had little choice. She relies on her job to support her four-year-old son after both her father and husband died.

“He made a lot of promises. He told me he was going to help me financially with my son’s school and was also going to help me pay my rent with a promotion, so I did it,” she says. “Afterwards, he told other security officers and every time I came to the factory, I felt humiliated and diminished. I never got a salary increase and never got any financial support.”

The head of security was not the only man at the factory to notice Marie. In March, her line supervisor began sexually harassing her, telling her he masturbated when he thought of her at home. She felt powerless to report him, knowing what happened to other women who complained. So to keep her job, she kept silent. But his behaviour got worse.

“He told me that if I didn’t agree to sex with him, he was going to pull me out of the line where we assemble clothes,” she says. She refused and in retaliation every time she went to the toilet she found piles of clothing added to her workstation, making it impossible to complete her work for the day. After weeks of harassment, she finally snapped when he began touching her inappropriately.

Workers are not considered as humans or as needing rights

“I told him to leave me alone, and because of that I was suspended for three days,” she says. “Even now, he is harassing me. He still wants to have sex.”

Yet Marie says that what is happening to her is standard practice at her factory and that other women are also afraid to speak out, scared of what might happen after they tell their story.

In recent years, Haiti, the poorest country in the western hemisphere, has promoted itself as a cheap and available destination for US clothing brands seeking low-cost suppliers that can take advantage of 2006 legislation that allows duty-free entry for goods made there by US companies.

About 60,000 Haitians work in one of the country’s 41 garment factories, producing clothes for more than 60 American companies.

Yet activists say conditions at the factories are akin to prison camps, with non-existent labour rights and where sexual abuse is rife.

“Workers are not considered as humans or as needing rights,” says Yannick Etienne, of the workers’ rights organisation Batay Ouvriye. “The pay is so low that it puts women in situations where they have to accept [forced] sex in order to pay their rent.”

The government has not raised the minimum wage since 2019, despite inflation of more than 15%. The country is experiencing catastrophic levels of insecurity and political instability after the assassination of President Jovenel Moïse last year. As a result, food and fuel prices have escalated. Unions are fighting for an increase in the minimum daily wage of garment workers from 500 to 1,500 gourdes ($5-15).

Female garment factory workers the Guardian spoke to confirm that to get a job – which has become harder because so many people are looking for work – women are expected to have sex with a male manager.

“If you don’t accept to have sex with the manager, your application will be rejected,” one worker says, adding that she works on a line that produces 3,600 T-shirts a day. “You must oblige or you won’t have a job, and also if you want a promotion, you must have sex with your supervisor.”

Workers interviewed by the Guardian also spoke of having to use scrap material as sanitary towels because they could not afford to buy their own.

Rose-Myrtha Louis, a coordinator at the Haitian Workers’ Renovation Syndicate, said: “We are supposed to have access to pads, but we have to use waste from T-shirts [because] we don’t have enough money. It has given us infections. It’s just another way we are suffering.”

A 2021 report from Better Work Haiti, a labour compliance group backed by the International Labour Organization and the World Bank, found that 80% of workers and their families have had to cut down on meals. It also found that 96% of factories surveyed failed to comply with Haiti’s health insurance and social security contribution requirements, putting workers’ lives at risk.

“When you consider the price that the clothes are sold for, and the wages we receive, it’s as if we are selling our blood,” Marie says.

The Haitian Ministry of Trade and Industry did not reply when asked for comment.