Students and the police protest in several cities of Haiti 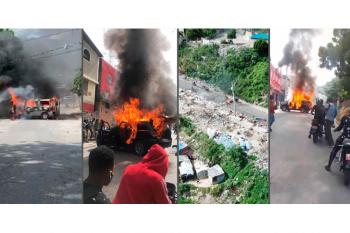 As the police demonstrate in Haiti's capital, students in Jeremie (southwest) and Jacmel (southeast) also demanded on Monday teachers in their schools, a month after the resumption of the course.

Hundreds of students marched through the streets of Jeremie, downtown of the Grand Anse department to demand, in addition, better quality in public education, which represents only 20 percent of the education system.

In Haiti's former commercial port, there were clashes between teachers and the police, trade unionists denounced.

Meanwhile in this capital, the police reissue a protest to demand Jean Pascal Alexandre's release, who is a member of the Brigade for the Fight Against Drug Trafficking, detained on May 8 on charges of murder, arson, destruction of public property and attack against the security of the State.

Several State and passenger transport vehicles were set on fire in various communes of Port-au-Prince, and heavily armed officers give the government an ultimatum for the release of their colleague from prison.