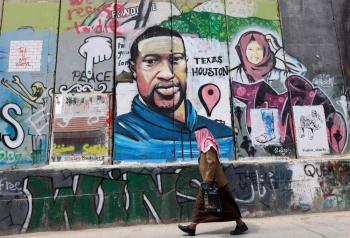 We live in revolutionary times.

A nationwide coalition rallied to defend Indigenous land rights against a Coastal GasLink pipeline in Wet’suwet’en territory last year. In the U.S., the killing of George Floyd at the hands of Minneapolis police lent fresh urgency to the long fight for racial justice in America and beyond. Now we are seeing vocal pan-Palestinian unity in the push for freedom amid the latest bout of violence.

Much has been made of the unprecedented diversity of each of these liberation movements. Each one is distinct but connected, fighting not only for their own liberation, but for the liberation of oppressed peoples everywhere.

Across Canada, thousands of people have rallied to support Palestinians, as they were newly bombed by Israel. Both Black Lives Matter and Idle No More have released solidarity statements.

Last year, while a mural of Floyd appeared on an Israeli “separation wall” in the West Bank city of Bethlehem, a Palestinian flag was hoisted alongside the Mohawk and Hiawatha flags in Tyendinaga, near Belleville, Ont., at a February 2020 pipeline protest.

“We proudly hung up the Palestinian flag at the rail blockade because we recognize the Palestinian struggle,” a protester told Chandni Desai, a Palestinian rights activist and scholar, who wrote about it in a new article published in the Journal of Palestine Studies.

The solidarity we see is not new. The charismatic American voting rights activist Kwame Ture, a.k.a. Stokely Carmichael, once the “honorary prime minister” of the Black Panther Party, coined the phrase “Black Power.”

It was a liberation movement that Ture, Malcolm X, the Student Non-violent Coordinating Committee and other radicals aligned with the Palestinians.

Many in the Black Panther Party considered themselves as living within a colony in the U.S., which is why they believed Black liberation was linked with anti-colonial battles around the world.

Ture noted the legal foundation of the State of Israel was the Balfour Declaration: a 1917 promise by a British politician to create a national home for Jews on land colonized by Britain — Palestine.

“Palestine did not belong to the British,” Ture said.

The six-day Arab-Israeli war of 1967, which Israel decisively won, took place as the Black Power movement was getting impatient with the pace of progress in the U.S. The Black Panther Party began to build connections with Third World movements, particularly in the Middle East.

“During this period, the Palestine Liberation Organization (PLO) began to use armed struggle as it redefined itself as a national liberation struggle, and also built links with revolutionary Third World movements,” says Desai, who is a University of Toronto professor of Critical Studies of Equity and Solidarity, and an expert on settler colonialism, racial capitalism and Palestine-Israel.

Not long after, in the 1970s, Palestinians and Indigenous peoples in Canada came together when the Third World People’s Coalition hosted a PLO delegation in Vancouver.

The shared framework of colonialism and apartheid allowed Palestinians to make ties with Indigenous struggles here, especially around land and reclamation issues, Desai said. The first intifada against Israeli occupation of the West Bank and Gaza was taking place in 1990 during the Oka crisis — a months-long Mohawk resistance against the government of Canada and Quebec.

“The intifada became an inspiration for the Indigenous warriors to say, ‘How can we engage in militant resistance but not in a way that our people are all thrown in prison? How do we shift our tactics?’ ”

No, this solidarity is not new. But modernity has enabled a closer-knit, global interconnectedness. Digital communications can nullify geographical barriers and with people around the planet sharing experiences, scholars like Desai are able to draw connections in the liberation movements by linking the systems of oppression they resist.

The particular connections she sees are in policing tactics, militarization of policing, anti-terrorism, prisons and surveillance technologies, among others.

For instance, Israeli police trained police departments in Ferguson, Mo., where Michael Brown was shot, and in Baltimore, where Freddie Gray was killed by police in 2015. The stated objective was anti-terrorism training but such sessions have led to concerns about the sharing of tactics like those cited by Desai.

Canada is no exception. Racism in policing is as old as our country. The RCMP was founded to clear the plains of Indigenous people to make way for the railway. The same systemic disregard leaves Black residents in Toronto 20 times more likely to be killed by police than are white residents, and to face disproportionate rates of arrest and charges, according to the Ontario Human Rights Commission.

Desai says she often asks her students, “When the war in Iraq or Afghanistan ends and all the weaponry that the U.S. Army buys or Canadian forces have, where do you think the surplus military equipment goes? They bring it back — give it to law enforcement domestically that use it on their own people.”

Of course, the targets of these oppressions are disparate — separated by geography and identity. Their struggles are distinct — a Palestinian’s relationship with state brutality differs from those experiences in Canada, for instance.

However, the forms of oppression are linked and increasingly so are their targets, who see one connection between all that they resist: white supremacy. Not necessarily the KKK or Proud Boys-style overt white supremacy, though that does play a role, but the ideology of Europe being more advanced than other cultures and therefore superior.

In its solidarity tweet, Black Lives Matter said: “We are a movement committed to ending settler colonialism in all forms and will continue to advocate for Palestinian liberation (always have. And always will be).”

The genesis of the contemporary Black and Palestinian solidarity may seem like a George Floyd legacy, but Desai says those ties lie in another instance of police brutality: the 2014 killing of 18-year-old Michael Brown in Ferguson.

It was around midday on Aug. 9, 2014. Brown was walking down the street with a friend, when a cop in a car asked him to stop. Minutes later he was dead, his body riddled with seven gunshot wounds. The cop, Darren Wilson, who fired a total of 12 bullets, said he did so in self-defence. Brown had no weapon. The death sparked nationwide protests, giving rise to the phrase “Hands up, don’t shoot” and propelling the fledgling Black Lives Matter movement.

Meanwhile, Palestinians in Gaza were undergoing an aerial and ground invasion by Israel. Social media was now active.

“So as these extrajudicial killings are happening, Palestinians are trading tweets with people in Ferguson telling them, this is how you survive tear gas. This is how you protect yourself from state violence,” says Desai, who as a scholar on the region, travels frequently to the Middle East. “Similarly, Black organizers were tweeting in solidarity with the people in Gaza trying to resist this heavily armed military force.”

Two years later, that solidarity culminated with Black Lives Matter endorsing the Boycott, Divestment, Sanctions (BDS) movement and including it as a policy platform despite heavy condemnation.

On May 14 of this year, the First Nations protest movement Idle No More became the first non-Palestinian movement in Canada to issue a statement of solidarity with Palestinians, decrying “ongoing Israeli attacks and enforced settler colonialism” as it called upon Canada, the U.S. and the UN to “Boycott, Divest and Sanction the Israeli government for international crimes against humanity.”

International kinships are changing the fight against oppression and with that, just maybe, they’re bending the arc of history toward justice.