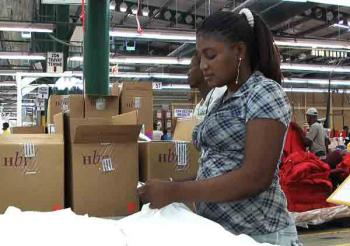 By Roger Annis
This article was first published on the Haiti blog of the Canada Haiti Action Network on Rabble.ca, Aug 6, 2012.
CBC Radio One is running a documentary series during the summer months entitled 'The Invisible Hand.' It purports to examine the big economic issues of our times.
Episode Six is titled, 'Offshore Labour, Human Capital, and Economic Development.' It looks at sweatshop factory investment in today's world and its country of focus is Haiti. The episode was first broadcast on August 1, 2012. Repeat broadcasts have followed.
In this episode, the issue of the day is not, "What moral and economic responsibilities do those in the wealthy countries have towards those in the countries who are victims of sweatshop factory investment?" No, the question is, "Should we buy the products of sweatshop factory production." So right away, the choice of 'what to do' is narrowly prescribed.
Nonetheless, the bulk of the program is spent answering the question, "Is sweatshop factory investment good or bad for the development of economically deprived countries?" All of the invited guests on the program answer "yes," to varying degrees. Although the program interviewed a labor activist in Bangladesh who presented an interesting and nuanced answer to the question at hand, the bulk of its attention was focused on Haiti, and from there we only heard from those who favor sweatshop factory investment. One of those was a sweatshop labor contractor, and, surprise, he says, 'Be patient. Haiti will eventually prosper from factory investment. AS for the slave wages he pays, he said his hands are tied--if he raises wages his customers (multinational corporations) will ship their work to other countries.
One economist-talking head proferred that Haiti must follow the path of countries like Korea that have elevated their economic development thanks to sweatshop factories (a debatable argument on several levels and beyond the modest scope of this article). He conveniently ignores studies of Haitian reality such as the November 2011 study by Haiti Grassroots Watch, 'Open For Business' that shows that sweatshop factory investment has been around for a long time in Haiti--it took off during the Duvalier tyranny of the 1970s--and the country is poorer as a result. (Dr. Paul Farmer has similarly argued that the vast influx of NGOs into Haiti in the past several decades has produced similar results.)
A representative of 'Better Work' was interviewed on the program and she said that investment can be a good thing as long as it is monitored and directed to ensure good standards of wages, work and environmental conditions are applied. Fat chance. 'Better Work' is a program that seeks to convince bosses to behave differently than what the international capitalist market (and for many, their personal choices) compels them to do. It has an office in Haiti and does monitoring there. While 'Better Work's monitoring can be useful in producing pressure and little victories here and there for workers, it is not a long term solution for them because its powers are extremely limited.
Nowhere in this program were heard voices in favor of the only two guarantees for better work conditions in Haiti and around the world--one, authentic trade union, peasant and other social justice organizations, and two, governments committed to defending and upholding social justice and workers rights.

To add insult to injury, the radio promo for Episode Six quoted an insulting claim by a former researcher for the Clinton Foundation who was interviewed for the episode. She said that poor Haitians will accept factory jobs at minimum wage (the program got its facts wrong on the current minimum wage in Haiti, it's not quite as low as cited) because their only alternative is to "sell their daughters or their sons (into the sex trade)."

There is, of course, a serious debate to be had in Haiti about the role and importance of factory investment, or not, in the country's economic plans. Haitians have differing or nuanced views on the subject. Regrettably, this CBC program does nothing to advance that discussion.
A comment on earlier episodes of 'The Invible Hand' is published on Rabble.ca here. To listen to Episode Six, August 1, 2012, click here: 'Offshore Labour, Human Capital, and Economic Development.'
Be sure to read the comments posted to Episode Six. It's too bad the program host and producers did not probe more seriously the subject before airing it. Here is one typical posted comment:

I'm disappointed in the lack of nuance in this episode. It's great to outline capitalist development theory -- interesting to hear how capitalist economists build out a theory of development that is void of ethics. But to not offer opposing criticisms to this body of thought and alternative approaches to development leave this episode feeling intellectually bunk and merely ideologically driven.
It is too simplistic to suggest that progress toward labour rights follows inevitably from unethical (or if you wish a-ethical) capital investment. There is no guarantees with "the invisible hand," where slavery and brutal work conditions continue to exist in regions who have been the recipients of long time investments of foreign capital in sub-standard practices. Further, it is naive to suggest that this development trajectory is achieved through the economy in and of itself. Social struggle is arguably a larger factor in building a just society. Capitalism and it's invisible limbs has little to say about, or do, with human values.
It is also unfair to your audience to suggest that there are no other choices to support developing countries other than deciding to purchase sweatshop goods. Fair Trade practices is an important current to explore here, as well as the cooperative movement. Shame on you to suggest that human suffering is the only path in economic development.
While it is tempting to only give airtime to dominant paradigms, it only makes for bad journalism. In short, your piece comes across as means to justify human misery.