'There's nothing': Misery a common scene as quake-ravaged Haiti grapples with a lack of aid 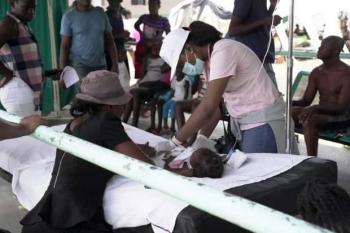 A health-care worker treats a young child at the Ofatma hospital in Les Cayes, Haiti on Wednesday. Patients are still trickling in, days after a 7.2 magnitude earthquake struck the region, leaving more than 1,900 people dead and some 10,000 injured. (Paul Smith/CBC)

The courtyard of the Ofatma hospital in Les Cayes, Haiti, is a scene of abject misery right now.

People wait with arms that were crushed under cinder blocks, heads gashed open by a falling wall. There's children, with skin torn from their bodies, screaming in pain as someone tries to dress the wound.

All are waiting for treatment.

Dr. Edouard Destine has been working nearly non-stop since the 7.2 magnitude earthquake struck the country's southwest on Saturday morning, killing more than 2,000 people and injuring some 12,000 others. He looks dazed as he wraps a cast onto a woman's broken arm.

It's taken many of these patients days to get past rock slides and washed out roads to seek help.

Destine, who is the hospital's orthopaedic surgeon and chief of staff, says they're running out of supplies, but that his staff is doing everything they can.

"We have to see the patients," he said.

Proper treatment is hard to come by right now. Dozens of staff and volunteers have been working around the clock — but they can only do so much.

"This building itself has suffered minor damage in the earthquake," said Brian Johnson, a retired paramedic from Ontario who flew down to help. "We can't use the surgical area because it's completely damaged."

Patients are lined up outside the building, under the awnings. As aftershocks still shake the area — and nerves — patients, doctors and family members scramble into the open area, seeking a safe space.

Nurses and other staff drag a man out into the courtyard on a bare mattress. He had arrived earlier that day with a broken pelvis, which they don't have the resources to treat. All they can do is wait to get him on a helicopter to Port-au-Prince.

Co-ordinating efforts is Canadian volunteer Valerie Rezpka. She's constantly on the move, assessing patients and marshalling what resources the hospital has left. Five days into the effort, you can hear a certain weariness in her voice.

"There's nothing in this hospital," she said. "The beds are full, the cupboards are empty. We need as much as we can get."

This region along the southwestern edge of Haiti is beautiful, poor and hot. After Saturday's quake, two tropical depressions tore through the area, bringing heavy winds and rain. Thousands of people were sleeping outside; they'd lost their homes or feared getting caught in another aftershock.

Hundreds of people are currently living in one tent city in Les Cayes's soccer field. These camps have popped up throughout the region. It was a pretty bare and bleak camp before, but the fierce storms have made it decidedly worse.

Help and supplies are slowly trickling into Haiti after Saturday's devastating earthquake, but residents in more rural areas of the country fear aid will never come. 3:18

"It's a misery, man," said Sydnay Annonce, who is living in the camp after his home was destroyed in the quake. His shelter here is made up of a few torn sheets of plastic and some scrap wood.

The camp's field was flooded after the storms, and now people's feet are swollen from walking barefoot for days in the mud. Health officials worry that waterborne diseases, such as cholera, will not be far behind.

Many of the people sheltering in this particular camp come from a local neighbourhood nestled beside the banks of a river. The earthquake shook a giant chunk of the riverbank loose and the rain washed more away.

Residents fear the rest will fall in, with the river washing away whatever is left of their damaged homes.

Standing on the remaining riverbank, Pierre Jonas says the real problem isn't the damage, but the fact that no one is coming to fix it.

"The big problem we have in Haiti?" he asks. "It's that we have no government."

A string of disasters

Haiti's political system has been fraught for decades. The earthquake in 2010 killed more than 200,000 people, and the price of rebuilding was pegged as high as $13.9 billion US — more than the entire country's GDP at the time. Then Hurricane Matthew hit in 2016.

Scars from the last disasters remain everywhere. Driving down the main street of Les Cayes, it can be hard to tell if something was damaged in the 2010 quake, the 2016 hurricane or this week's calamities.

Gang warfare has closed off certain areas surrounding the capital of Port-au-Prince, and roads into these disaster areas remain all but impassible due to threats of violence and kidnapping. Much-needed aid is stalled.

It's also all playing out against the backdrop of the COVID-19 pandemic, which has stretched health-care systems around the world.

From his perch looking over the river, Jonas said Haiti is in dire need, yet there doesn't seem to be anyone in a position to provide basic necessities.

"We need hospitals," he said. "We have no medicines in this country. We need schools. We need a lot of things."

But no one knows where those will come from, he said.

The situation is expected to worsen. Roads into the region's more remote areas are finally opening up, which means additional injured patients are flooding into hubs, like Les Cayes. And all that standing water in the tent camps means people will continue to get sick and need treatment.

The system here was being stretched to its limits before the earthquake hit. Now, nearly a week later, what little supplies they had are gone — and the wave of misery continues to roll in.