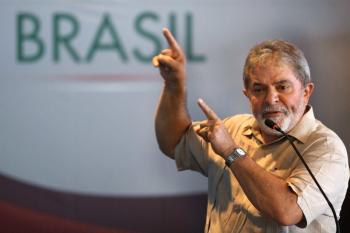 Lula speaks during the opening of a Fiat Chrysler plant in Ipojuca, 2010. Photo by Ricardo Stuckert/Flickr.

On April 5, 2018, former Brazilian president Luiz Inácio Lula da Silva was arrested and jailed as part of Lava Jato (Operation Car Wash), the sprawling criminal investigation led by judge Sergio Moro that dominated the country’s politics for several years. On March 8, 2021, Supreme Court Justice Edson Fachin ruled that the Curitiba court presided over by Moro had lacked the jurisdiction to prosecute Lula and his charges were annulled, restoring his rights and setting the stage for a political comeback.

The Lava Jato investigation’s political bias is well documented. On Telegram messages leaked to The Intercept Brasil, top prosecutors communicated openly about their true intention: to prevent Lula, the most popular politician in the country, from running against current president Jair Bolsonaro in the 2018 election. Prosecutors worked with American authorities over the course of the investigation, sometimes keeping their cooperation secret from the Dilma Rousseff administration, and there are frequent references to the FBI in the leaked conversations which clearly communicate that “the closest relationship [was] between members of the Brazilian PF [Federal Police] and the FBI agents.” As a result, the reputation of Sergio Moro and his investigation have been publicly tarnished. During a session last month in which the Supreme Court decided to “adjudicate over Moro’s bias,” Justice Gilmar Mendes called Lava Jato “the biggest judicial scandal” in the history of Brazil.

By the time Lula was released from prison on November 8, 2019, Moro (then Bolsonaro’s Minister of Justice and Public Security) and the entire Lava Jato investigation were embroiled in political scandal. He resigned on April 24, 2020, splitting from an increasingly embattled Bolsonaro as the severity of the COVID-19 pandemic in Brazil was rapidly increasing. Although Bolsonaro’s popularity ratings have fluctuated since the start of the pandemic, his current numbers are not promising when compared to Lula’s. A survey from March 7 shows that 38 percent of Brazilians polled would consider voting for Bolsonaro a second time, while 50 percent said that Lula—who left office in 2011 with an 87 percent approval rating—would receive their vote. According to journalist Michael Fox, the former president has the highest approval rating and the lowest disapproval of any of next year’s 10 presidential hopefuls.

Lula’s presidency (2003-2010) is often lauded as one of the greatest successes of the “Pink Tide” era: his war against hunger bore incredible results (the Bolsa Familia welfare program lifted tens of millions out of poverty) and his economic projects were extremely auspicious, resulting in a 30 percent growth of the Brazilian GDP between 2004 and 2013. Additionally, his alliances with other progressive governments across the region represented an opportunity to create an alternative integration model not subject to neoliberal impositions by the International Monetary Fund. Lula’s successes, however, also made him a target: his redistributive campaigns were viewed by Brazilian oligarchs as a challenge to their societal privilege, and his willingness to work with self-described socialist governments in the region made him an enemy of the United States. Bolsonaro, by contrast, presented himself as a far-right ideologue and free trade advocate. His neoliberal policies have been welcomed by many Western states, despite the fact that he has increasingly opened up the Amazon rainforest, sometimes referred to as the “Earth’s lungs,” to the global cancer of deforestation.

For its part, Canada has quietly supported Bolsonaro over the course of his presidency. While the French government protested the ratification of a free trade agreement (FTA) between the European Union and the MERCOSUR trade bloc due to worsening deforestation, the Trudeau government has been steadily negotiating an agreement of its own with MERCOSUR over the past three years. That’s right: at the same time that Trudeau was participating in the Montréal climate march, his government was actively involved in trade negotiations with the man who is smothering the planet’s lungs for profit. Furthermore, Bolsonaro has been twice reported to the International Criminal Court for “incitement to genocide” against the Indigenous peoples living on these protected lands. According to a claim filed by Chief Raoni Metuktire of the Kayapo people and Chief Almir Narayamoga Surui of the Paiter Surui tribe on January 22, 2021, deforestation under Bolsonaro has risen “by 34.5 percent in a year,” while “the assassination of Indigenous leaders is at an 11-year high and environmental agencies have collapsed or faced threats.”

In August 2019, NDP leader Jagmeet Singh called on Trudeau to halt negotiations with MERCOSUR due to the intensification of deforestation under Bolsonaro. He was ignored, and negotiations continue to this day. According to the Government of Canada website, “a comprehensive FTA with a large, emerging market such as MERCOSUR would provide improved market access [while] creating more opportunities for exporters to tap rapidly-growing markets.” Nowhere does the webpage mention that, in this case, “market access” is a direct synonym for “ecocide.”

The page on Canada-Brazil relations notes that Canada’s direct investment in Brazil in 2019 was $12.2 billion, making it the 15th-largest recipient of Canadian investment in the world. The page also asserts that “Canada…continues to advance and promote human rights in Brazil, including [those of] indigenous peoples,” before helpfully noting that “important opportunities for Canadian companies exist in: oil and gas [and] mining.”

The reasons for Canada’s support for Bolsonaro are as obvious as they are vile. Canadian firms invest billions in Brazil every year, mostly in the mining and infrastructure sectors, and they are always looking to expand their reach to unexploited areas of the country. As a CBC News Alert from October 28, 2018 casually admitted: “Brazil’s new president elect, Jair Bolsonaro, is a right-winger who leans towards more open markets. This could mean fresh opportunities for Canadian companies looking to invest in the resource-rich country.”

The most important Canadian company operating in Brazil is the Toronto-based Brookfield Asset Management, previously known as Brascan, which Yves Engler describes as “the quintessential rebuttal to left nationalism [in Brazil] for decades.” The company has invested hundreds of billions in “assets under management” around the world, but its history in Brazil is particularly sickening. Brascan (also called “the Canadian octopus” due to its outsized influence in the country) paid its employees very poor wages, spied on union activists and left-leaning government officials, and participated in plots against President João Goulart, who was attempting to keep more of the profits from Brazil’s natural resources within the country. Goulart was eventually removed in a US-backed coup and replaced by the military dictatorship which Bolsonaro has so often praised. As Engler points out, “the post-coup military dictatorship was good for business. Between 1965 and 1974 Brascan drained Brazil of $342 million ($2 billion today).”

While the Trudeau government has disingenuously expressed concern for the human rights situation in Venezuela, Cuba, and elsewhere, it has simultaneously followed in the long tradition of tacit approval for or direct involvement in right-wing authoritarianism across Latin American and the Caribbean. Following in Stephen Harper’s footsteps, Trudeau has fought against pro-democracy forces in Haiti by giving police training and diplomatic support to Jovenel Moïse, who refused to step down when his term ended on February 7 and has been brutally repressing a new wave of protestors ever since. The Canadian government has also been silent on the police repression and anti-activist violence of another strong ally, the Colombian government. Justice for Colombia reports that 14 massacres were committed by paramilitary forces in the first two months of 2021 alone.

History shows that protestors who can be used for imperialistic ends are the only ones who are worthy of the Canadian government’s attention. For example, when Russian opposition leader Alexei Navalny was imprisoned in Russia on February 2, both Trudeau and Minister of Foreign Affairs Marc Garneau released statements calling for his release that same day. Meanwhile, in the 580 days that Lula da Silva was unjustly imprisoned, the prime minister did not make a peep. Trudeau has met with Juan Guaidó and ceaselessly advocated for his installation as president of Venezuela in press conferences, public statements, and through Canada’s involvement in the Lima Group. Where is his criticism of Jovenel Moïse, who exceeded his mandate but remains in power to kill and imprison pro-democracy protestors and directly target members of the press who are attempting to raise awareness of his atrocities.

On February 26, a statement from Global Affairs Canada said that Garneau met with US Secretary of State Antony Blinken and “reaffirmed a commitment to address human rights and needed reforms in Cuba.” What about Canada’s commitment to the victims of massacres and police violence in Colombia, a country where the RCMP has collaborated on security training, or of the Brazilian Indigenous populations living under threats of genocide from the man the CBC harmlessly described as “a right-winger who leans towards more open markets?” For that matter, where is the Trudeau government’s “commitment to address human rights and needed reforms” on Canadian reserves, where 43 percent of water systems remain at medium or high risk as noted in a recent article by Pam Palmater?

The impeachment of Rousseff and the jailing of Lula were part of a collaboration between domestic conservative forces and American authorities, a collaboration that recalls the long history of US-backed assaults on leftism across Latin America, always with the implicit or outright cooperation of the Canadian government and business community. As environmental destruction intensifies and the international community refuses to reconsider its relationship to Bolsonaro’s Brazil, many progressives across the world are hoping that Lula will be able to pick up where his sabotaged 2018 campaign left off. It is a given that the same forces that jailed him will work tirelessly to prevent his return to the presidency, either by uniting around Bolsonaro as the anti-Worker’s Party candidate or ditching him in favour of a more polished centrist who will nevertheless continue the current president’s economic policies. One thing, however, is certain: Bolsonaro is a global health hazard whose rise to power was aided by the US and welcomed by Canada, and Lula has proven that he has the will and ability to radically remake Brazilian society. Just don’t expect him to receive Trudeau’s solidarity.

Owen Schalk is a writer based in Winnipeg. His areas of interest include post-colonialism and the human impact of the global neoliberal economy.