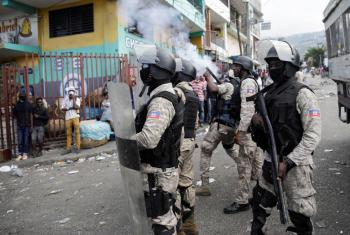 The United Nations issued a scathing report on Tuesday that accused Haitian police of not protecting an impoverished neighborhood from corrupt officers and gang leaders they say shot at people and set fire to homes and cars in a recent three-day attack.

The report urged local authorities to prosecute those responsible for the violence that erupted in November in the Bel Air neighborhood, a largely pro-opposition community in the capital of Port-au-Prince known for organizing anti-government protests.

“Far from being an isolated incident, the Bel Air attack illustrates the recent evolution of the current context in Haiti, mainly characterized by the general insecurity in working-class neighborhoods and slums, the impunity of members of criminal gangs...the alleged collusion between them and certain political and economic actors, the links between gang members and certain agents of the Haitian National Police, as well as the lack of police intervention,” the report stated.

The investigation cited sources alleging that a government representative offered about $50,000 to organizations if they convinced certain people in Bel Air to lift barricades set up by anti-government protesters in a key area that prevented access to major markets. Days after the alleged meeting occurred, the report said that a former policeman, Jimmy Cherizier, known as “Barbecue,” and other alleged gang leaders repeated the request to have the barricades lifted.

The community refused, and on Nov. 4, dozens of armed men opened fire in the area and burned homes and cars as part of a three-day rampage. At least three people were killed and six injured, although the U.N. said it believes the number could be higher.

Cherizier told The Associated Press on Tuesday by phone that he is innocent and that a proper investigation had not been launched. While no arrest warrants have been issued in the Bel Air incidents, Cherizier is wanted in other fatal attacks, including one in the nearby slum of La Saline in which up to 59 men, women and children were killed in November 2018.

“More than a year after the fact, the lack of progress is particularly worrying and the involvement of Jimmy Cherizier ... in other similar acts demonstrates the direct impact of impunity on the recurrence of violence,” said the report issued by the UN Human Rights Office and the United Nations Integrated Office in Haiti.

The report also stated that the gunfire in the November attacks lasted about three hours every day, and that victims called police for help, “including on several radio stations and on social media, without reaction.”

The report states that Haitian police said they did not respond because of problems including a lack of vehicles, communication equipment and individual protection for officers.

Two spokesmen for Haiti’s National Police did not immediately return messages for comment.

Tuesday’s report was released as Haitians denounce a rise in crime blamed on armed gangs vying for more control as the government weakened following months of massive protests.