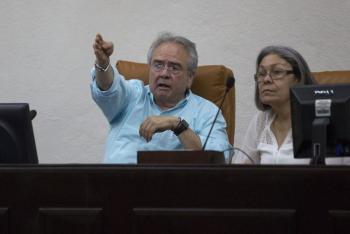 The Trump administration and Canada’s government imposed sanctions Friday on some Nicaraguan officials, tying them to a tough crackdown on street demonstrations that began in the Central American country in April 2018.

Any assets they have in the U.S. will now be frozen.

Canada didn’t immediately identify who its sanctions were aimed at, saying only that they are “key members” of Nicaragua’s government.

The U.S. already imposed sanctions on at least six Nicaraguan officials, including Rosario Murillo, who is the vice president and wife of President Daniel Ortega, their son Laureano Ortega and current National Police Chief Francisco Díaz.

The sanctions are related to a crackdown last year that saw at least 325 people killed and more than 2,000 injured, according to the Inter-American Commission on Human Rights.

“The United States is sending an unequivocal message to President Ortega and his inner circle: we stand with the Nicaraguan people on their calls for reform and a return to democracy,” said Sigal Mandelker, the Treasury undersecretary for terrorism and financial intelligence.

Canada said it was acting because of the Nicaraguan officials’ violations of citizens’ human rights, including the right to life, security, speech and assembly.

“Human rights violations in Nicaragua cannot continue with impunity,” Canada’s foreign affairs minister, Chrystia Freeland, said in a statement. “The Government of Nicaragua must be held accountable for its action and must bring an end to the current crisis through real dialogue with opposition groups.”

The sanctions were announced a day after the Organization of American States urged Nicaragua to release all imprisoned government opponents, cancel the legal cases against them and restore fundamental rights.

The government says it has released all prisoners from a list agreed upon during negotiations. But the opposition says at least 84 people were arrested after the initial agreement and remain jailed.

About 600 prisoners have been transferred to house arrest since February.