U.S. Congress to U.N.: What are you doing to compensate Haiti's cholera victims? 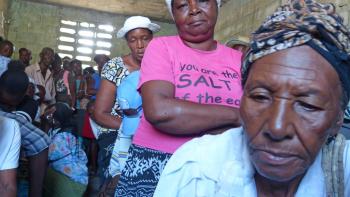 In a July 2017 file image, cholera victims, some of whom have lost multiple family members to the waterborne disease that causes life threatening vomiting and diarrhea, crowd a school house in Haiti's Cité Soleil slum in Port-au-Prince. Jacqueline Charles

More than 100 members of Congress are sounding the alarm over Haiti's deadly cholera epidemic and the victims of the waterborne disease who are still awaiting compensation from the United Nations.

Cholera, which was non-existent in Haiti for at least a century until it was introduced to the country eight years ago by U.N. peacekeepers, has killed 10,000 Haitians and sickened about 800,000 since the initial outbreak after Haiti's 2010 earthquake.

And while the number of cholera deaths and illnesses have continued to decline, according to the latest statistics from Haiti's Ministry of Health, victims are still dealing with the ripple effects, members of Congress said in a bipartisan June 14 letter to U.N. Secretary-General António Guterres.

"We are concerned that the UN's 2016 plan ...to eliminate cholera and provide redress for victims is not meeting victims' rights and needs," the letter stated.

In 2016, after finally accepting responsibility for its role in bringing the epidemic to Haiti, the U.N. announced a new approach to ease the plight of Haitians. It pledged to raise $400 million to treat cholera victims and improve sanitation and water infrastructure in Haiti, while also providing "material assistance and support" to those most severely affected. Victims, the global body promised, would be consulted on any compensation decisions.

In the letter, congressional lawmakers say they want to know what steps the U.N. has taken to make direct compensation payments to victims because it appears that it is "unwilling to provide compensatory payments to cholera victims or engage directly with those affected about their needs."

But Josette Sheeran, Guterres' U.N. envoy for Haiti who oversees the cholera plan, said the U..N. has already launched a process "to provide meaningful consultations with those most affected by cholera."

The current budget, she said, allows for $150,000 to be spent per community, and "the communities are empowered to democratically choose how they want funds invested, either through community or individual investment."

So far, three sections of Mirebalais, where the first outbreak occurred after cholera-contaminated sewage entered the nearby Artibonite River from a U.N. camp, have decided to use their share of the money to bring clean water to their area, the U.N. said. A fourth community has decided to construct a new marketplace.

"The biggest obstacle to expanding remains the lack of funds," Sheeran said. "As funding becomes available, we will continue to expand these consultations and the projects that affected community platforms prioritize."

H er office noted that communities can still choose individual compensation for specific victims — but only after more discussions with the U.N.

Brian Concannon Jr., executive director of the Boston-based Institute for Justice and Democracy in Haiti (IJDH), said if discussions with the communities about how to spend their compensation have started, he welcomes them. But he said the victim organizations his group has contacted in Haiti have not heard from the U.N. He also questioned whether $150,000 was sufficient given the seriousness of the disease.

The 101 members of Congress who signed the cholera letter said they have concerns about the community projects.

"We question whether community projects alone will redress the harms to affected families and allow them to recover," the letter stated.

The letter is the latest effort by Haiti's cholera victims and the Institute for Justice and Democracy in Haiti to urge the U.N. to keep its promise to include victims in the decision-making as well as compensate them for losses as a result of the disease.

The U.N. had for years refused to acknowledge its involvement in Haiti's initial cholera outbreak, even after scientists matched the strain in Haiti to the one in Nepal. Nepal had an outbreak on Oct. 8, 2010, days before Nepalese soldiers arrived in Haiti and before a young Haitian lab technician confirmed cholera's existence in the quake-ravaged country.

During a visit by the U.N. Security Council to Port-au-Prince last year, victims vented their frustrations by hanging banners in the streets and staging protests near the council meetings. Haitian lawmakers also requested compensation in a private meeting with security council members.