Is the U.S. Covering Up its Role in Moïse’s Murder? 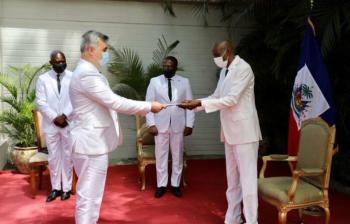 President Jovenel Moïse accepting the credentials of new Russian Ambassador to Haiti, Sergey Melik-Bagdasarov, on Jun. 2, 2021. Did diplomatic moves like this have a bearing on Moïse’s assassination?

here are growing signs that Washington may have played a greater part in the Jul. 7, 2021 assassination of Haitian President Jovenel Moïse than previously understood.

The U.S. Justice Department successfully sealed evidence last week in its prosecution of Colombian mercenary Mario Antonio Palacios Palacios, one of the fatal machine-gunning’s triggermen who was extradited from Panama to Miami in January. It is the latest development in an emerging pattern that suggests the U.S. is working to conceal proof of its complicity in the gruesome magnicide.

Speculation is now growing that the U.S. government is hiding evidence to keep its role in the assassination a mystery.

“The prosecutors are not supposed to deal directly with the CIA,” former U.S. federal prosecutor Richard Gregorie also told Univision, “but where a prosecution must disclose classified information which comes from the CIA or directly involves the CIA, there must be protocols that involve CIPA.”

Haitian lawyer Newton Saint-Juste, who has become a leading legal voice seeking the truth behind Jovenel Moïse’s murder, is disturbed that CIPA has been invoked in this case.

“The CIPA request suggests that some people who worked previously or who are currently working for the U.S. government had a role in the assassination of Jovenel Moise,” Saint-Juste said. “It appears that the U.S. knew something or still wants to hide something. What we are looking for is the truth and the masterminds of this assassination.”

On Apr. 4, Saint-Juste requested the Dominican Attorney General investigate the alleged laundering through Dominican banks of $20 million used for Moïse’s assassination. Then on Apr. 18, he publicly wrote U.S. Secretary of State Anthony Blinken, asking him to “clear away all doubt about a possible active or passive involvement of the United States” in the assassination.

“We know some of the people involved in the killing worked for the DEA or FBI in the past, so we need to know in this case if they were acting on their own or for one of these U.S. agencies,” Saint-Juste told Haïti Liberté. “The prosecution’s request suggests that the U.S. has played a role in this assassination and they are trying to hide their participation. It is important for the U.S. to clarify this situation. If they keep hiding the truth and remain silent on this assassination, I think everyone will agree that they played a role.”

A former high-ranking Haitian government source, who wishes to remain anonymous, said that Washington’s lack of action against three Florida-based businessmen who are U.S. citizens – Antonio Intriago, Walter Veintemilla, and Arcangel Pretel Ortiz – is very damning. They are the owners of the companies Counter Terrorist Unit (CTU) and Worldwide Capital Lending Group — which respectively hired and financed the now-imprisoned Colombian mercenaries who killed Moïse.

The source also said that Jovenel Moïse’s Jun. 2, 2021 accreditation, one month before his assassination, of a new Russian Ambassador to Haiti, Sergey Melik-Bagdasarov, may have motivated Washington to play a role in the plot or turn a blind eye. Haiti and Russia “discussed the prospects for strengthening bilateral relations between the two countries,” Moïse wrote in a tweet at the time of the credentials ceremony. It was the first time Haiti had established diplomatic relations with the Russian Federation.

Prominent Haitian intellectual and ophthalmologist Dr. Frantz Large, a friend of the slain president, has charged that Washington was angry that Moïse was establishing relations with Russia and working to mend ties with Venezuela’s president Nicolas Maduro. Large alleges that Moïse “was executed by the American secret services because he was making a [political] change of direction.”

Haiti’s fourth investigating judge, Merlan Belabre, saw his mandate expire on Apr. 25, having accomplished nothing. Acting Prime Minister Ariel Henry, who is implicated in the assassination, has made no statements nor held any press conferences about the lack of progress in the investigation since taking power last July.

The judicial and political dysfunction in Haiti has made it easy for the U.S. to effectively take control the murder investigation, despite its possible implication in the crime. Two of the principal suspects – Palacios and former Haitian drug trafficker Rodolphe “Whiskey” Jaar – are being held in Miami, while a third – former Haitian Senator John Joel Joseph – is due to be extradited to Miami from Jamaica soon.

Meanwhile, Saint-Juste intends to write members of the U.S. Congress, which in January called for a probe of the assassination and a report by July.

“The U.S. executive has total control of this investigation,” Saint-Juste said. “There is a risk that we have total impunity for the U.S. citizens who worked previously or are working for the U.S. government. It’s important that the Congress knows that we need to know the truth, and the only way to find the truth is to have an unbiased investigation.”