Washington and its Allies are Growing Impatient over Haiti’s “Transition” 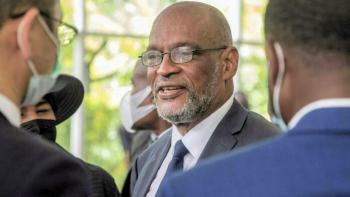 Interim Prime Minister Ariel Henry “is not moving forward. Worse yet, Musseau Agreement supporters are putting sticks in the spokes of the Prime Minister’s wheels, rendering him increasingly helpless as time passes.”

For the politicians carrying out the “Transition” in Haiti, the hour of reckoning seems to have come with regard to their main international overlords: the United States, France, and Canada.

For the moment, we can’t say that there has been a break between Port-au-Prince and Washington, Paris, and Ottawa. But, the latter are becoming very impatient over how the post-Jovenel Moïse “Transition” to an elected government is dragging on.

What most worries the international triumvirate is not so much the position of the Aug. 30 Montana Agreement signatories, who have set almost impossible conditions for interim Prime Minister Ariel Henry to resume talks with them.

Rather, it is the division among some allies and members of the Sep. 11 Musseau Accord, grouped around the Prime Minister, which worries them. Although Washington and Paris continue to call for dialogue between the rival coalitions competing to lead the “Transition” and to push for a rapprochement (and even a merger of the Accords), nevertheless, the two capitals want to see Ariel Henry move forward with his agenda to complete the “Transition,” even while his own allies, along with the rival Accords, continue to voice their disapproval and criticism.

However, Henry is not moving forward. Worse yet, Musseau Agreement supporters are putting sticks in the spokes of the Prime Minister’s wheels, rendering him increasingly helpless as time passes. During April 2022, many parties and political organizations which signed onto the Musseau Accord publicly rebuked Ariel Henry. Meanwhile, others, particularly his closest confederates, like lawyer André Michel’s Democratic and Popular Sector (SDP), warned him against any unilateral moves in organizing elections. André Michel and his friends are even about to present an almost impossible demand, at least for the moment: that there be named a Provisional Electoral Council (CEP), this on the assumption that the Prime Minister indeed wants to move forward toward elections as the “international community” demands.

The SDP released a note on Mar. 4, 2022 in which it warned Henry that: “There are four essential conditions for the organization of elections in Haiti: 1) a credible CEP; 2) the security of citizens and the territory; 3) dePHTKization of the state financial sector [The Haitian Bald-Headed Party – PHTK – was the ruling party of the Martelly and Moïse regimes.]; and 4) sufficient consensus. Otherwise, it’s a mess! The PM must assume his responsibilities,” said this pillar of the Sep. 11 Agreement. Furthermore, there will never be elections in Haiti, anyway, with this policy of appeasement vis-à-vis the criminal gangs, which have increasing leeway to terrorize the population or take the state hostage.

However, there is danger in delay, according to France and the United States, which believe that the Prime Minister should not wait forever to launch the electoral process.

However, Ariel Henry must take into account a big problem he faces: the hostility of the population (the first concerned) to any electoral operation as long as Haiti’s security situation is not improved.

Then there is the matter of growing hostility from a large part of Henry’s erstwhile political supporters. It seems forgotten (or at least very rarely mentioned) that not only André Michel’s SDP supports Henry. Many other political organizations, who apparently still trust Henry and do not intend to jump ship just yet, nevertheless continue to warn the Prime Minister about or to criticize the government’s non-compliance with the clauses in the Sep. 11 Agreement, which they all drew up together. Many clauses have never been respected.

Thus, the allies grouped around the Sep. 11 Agreement have pointedly warned: “This government initiative to set up a Provisional Electoral Council (CEP) outside of any consensus and to take steps to replace judges of the Supreme Court, whose mandate has come to an end, is perilous and unilateral.”

In short, Ariel Henry is walking on eggshells. And, in order not to find himself alone in the face of the other Accords and in particular the most powerful of all, the Montana Accord, he prefers to be cautious and above all to continue to engage in the well-known Haitian political tactic: marronage (which can be translated as “giving the run around”).

Unfortunately for him, the United States and France don’t see it that way. At all costs and even alone, if necessary, they want Henry to accelerate the establishment of the CEP even without the agreement of the other Accords and despite common sense. For these international overlords, the “Transition” has lasted long enough!

During the third virtual meeting organized on Thu., Apr. 21, 2022 by France and 19 other states and “international partners,” including the Organization of American States (OAS), United Nations (UN) and the International Organization of La Francophonie (OIF), a single leitmotiv emerged: elections, elections, elections. For the French ambassador in Port-au-Prince, Fabrice Mauriès, who reported on the meeting as a guest of Magik9 radio on Mon., Apr. 25, there is no doubt that the CEP can be constituted without problems, according to him. He believes that: “Politically, we continue to hope that the CEP can be established as soon as possible. Not only can the CEP be established, but the administration of the CEP can be functional again because we have two problems: a CEP that no longer exists, but also an administration that must be modernized and refinanced. These are the most immediate expectations, which would make it possible to trigger a new dynamic in order to move towards the elections.”

The French ambassador is blatantly ignoring the insecurity that rages in the country, such as the blocking of the southern and northern roads to the capital by gangs and the daily kidnappings affecting especially the Port-au-Prince metropolitan region. He foolishly believes that only the end of the “Transition” can bring normal life back to Haiti.

His position reflects that of all the “international partners” who took part in the virtual meeting hosted by France. Ambassador Fabrice Mauriès indicates that: “Several partners have indicated that we are now in a period of transition. It was an obviously necessary period but one that cannot last forever. There must be an end to this transition period. The Prime Minister himself said so. Its objective is to return power to an elected government. We share it. We have to arrive at a timetable that gives us this horizon, so that we can restore authorities that are legitimately and democratically appointed,” Mauriès told Magik9.

Haiti’s “friends” therefore have a single immediate objective: to put pressure on Ariel Henry to form a CEP and then launch the electoral process, even if the Port-au-Prince metropolitan region’s inhabitants remain cut off from the rest of the country by gang warfare. This goal remains, in truth, wishful thinking insofar as everyone, at least in Haiti, thinks it is impossible. Moreover, even Haitian “civil society,” the largest supplier of members to any CEP, remains convinced that it would be risky and even irresponsible under current conditions to ask the population to vote and potential candidates to travel around the country, in particular the capital and its outskirts, campaigning under the nose of all-powerful gangs.

When the French ambassador was asked if this position reflected a withdrawal of “international community” support for Prime Minister Ariel Henry or at least his policies, Mauriès replied tersely: “Neither on the level of current facts nor on the historical level . The actors who represent the international community in Haiti need a government partner who works with us to restore security, operate the judiciary, send children to school, and improve the education system. This is why we discuss, dialogue, and work with the current government. But, I also said that it is a period of transition. This transition period must have an end, it must lead to a timetable that will lead to a passing of power, according to the terms that will be the most consensual possible, to an elected government.”

Now, it remains to be seen how Ariel Henry and his wobbly allies intend to get out of this “con trap” (as the late French Prime Minister Raymond Barre called it in the 1990s) in order to make sense of things and the best possible decision that will be useful and good for him but, above all, for Haiti and Haitians.

But, on at least one point, the French Ambassador is indeed correct: the Transition period cannot last forever.