The weaponisation of antisemitism in Canada continues 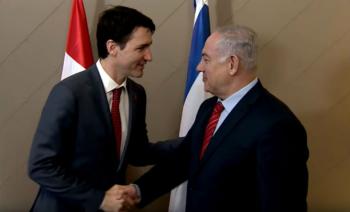 Since Chris Williamson correctly said of Labour’s response to the orchestrated allegations of ‘institutional antisemitism’ that ‘we’ve been too apologetic,’ things have clearly gone from bad to worse. The spectacle of all the present leadership candidates dutifully submitting to the Board of Deputies arrogant ‘ten pledges’ is very sad to behold. The implications within Labour of this capitulation are, of course, quite grim. However, as I’ve previously pointed out, the impact of these retreats extends beyond the UK and has a chilling effect on Palestine solidarity internationally.

Canada’s social democrat party, the New Democratic Party (NDP) has a far from admirable record when it comes to solidarity with the Palestinian people. Still, during last year’s federal election in October, NDP leader, Jagmeet Singh, responded to a series of questions from the Canada Palestine Association in ways that were quite positive. This included support for the right of the BDS movement to carry out its work without legal threat or character assassination. Singh also expressed ‘some concerns that the IHRA and its associated examples could undermine those who wish to speak out in favour of the human rights of Palestinians.’

A couple of months after this, however, as detailed in an article written by Sheryl Nestel of Independent Jewish Voices (Canada), Singh met with representatives of the Centre for Israel and Jewish Affairs (CIJA) to discuss “issues of interest to the Jewish community.” In this meeting, he failed to raise any concerns about the treatment of Palestinians by Israel and switched to a position of support of the IHRA definition, describing it as a “guiding educational lens” that may flush out hidden forms of antisemitism. For good measure ‘he argues that those who are “single-mindedly obsessed” with criticizing one country, Israel, demonstrate a latent antisemitism.’ Tellingly, Nestel says of this retreat, ‘You might call this the “Corbyn Effect,” in which progressive politicians scurry to disavow pro-Palestine politics in order to avoid being tarred with the brush of anti-Semitism that ultimately helped sink the leader of the British Labour party.’ Singh and others in the NDP leadership will discover to their cost that such capitulation, far from buying them peace, only emboldens the supporters of Israel and produces ever more exacting demands for abandonment of the Palestinian cause.

A concerted effort is now underway to have the anti-Palestinian IHRA definition of antisemitism adopted by the widest range of institutions and political jurisdictions throughout Canada. The Trudeau Liberals have predictably fallen into line and a private member’s bill, calling for support of the IHRA definition, is presently before the Ontario Legislature.  The intention is also to have city councils across the country ratify the definition but this attack has been challenged with considerable success so far. I wrote in July of last year about the brilliant united community response in Vancouver that prevented the adoption of the definition. Since then, a similar attempt has been thwarted in Calgary and, as I write this, news comes in that a vital victory has been scored in Montreal, with supporters of the IHRA definition going down to defeat in that city. In each of these three struggles, the work of Independent Jewish Voices (IJV) and their Canada wide campaign against the definition have been central to the victories that have been won.

A club against the left

Once the dreadful and intensifying reality of antisemitism is disregarded and, in its place, a cynical right wing slander is fashioned to hurl at critics of Israel, the uses of this false allegation are entirely elastic. As a club against the left, the charge can be put to use, even in situations where there is no immediate connection to the state of Israel. When Alexandria Ocasio-Cortez suggested last year that migrant detention facilities in the US were a form of concentration camp, she faced thunderous accusations of antisemitism. Of course, the concentration camp was a British invention, as even the Daily Mail has acknowledged, and a US government spokesperson, just a couple of months earlier, had accused the Chinese authorities of operating such camps without unleashing any comparable outrage. The use of the image of the concentration camp only becomes ‘antisemitic’ when the crimes of the US or its approved allies are being challenged.

In Canada, another example of the elastic properties of this bullying tactic has emerged. The Zionist organisation, B’nai Brith, has a long history of attacking any and all expressions of solidarity with the Palestinian struggle. The Canadian Union of Postal Workers (CUPW) are presently suing them over allegations of backing terrorism because of the union’s support for Palestinian postal workers. Perhaps with some justification, B’nai Brith feels the Trudeau government may be easier to intimidate than CUPW. In any event, linking up with a right wing Iranian group, they have actually issued an ultimatum to the government, giving it thirty days to list Iran's Revolutionary Guards as a terrorist organisation. They base this on the completely absurd claim that this arm of the Iranian military poses a threat to the safety of the Iranian and Jewish communities in Canada. Last year, Netanyahu was greatly pleased when the Trump Administration took just this step and the ultimatum is intended to bully the Liberals into doing the same.

Trudeau is, of course, no leftist and his government’s support for Israel is unwavering. Last November, when Israeli Defence Force representatives were given a platform at Toronto’s York University and the far right Jewish Defence League attacked those who protested this gathering, the Prime Minister accused those in solidarity with the Palestinians of “violence and racist chants” motivated by ‘antisemitism.’ B’nai Brith, however, sees no reason to be patient or diplomatic with the Liberals. They feel they can pressure the government into falling in line with Trump and Netanyahu and their confidence may not misplaced. Should the thirty days elapse with their demand unmet, Trudeau will doubtless be accused of complicity with “the most anti-Semitic regime on the planet.”

Trump’s so-called ‘Deal of the Century’ sets the stamp on a glaringly obvious plan to complete the Zionist colonial project and establish a permanent regime of Apartheid. The pretences of liberal democracy and a ‘peace process’ that once offered some cover for Israel’s crimes and some means of claiming legitimacy have all been jettisoned. The only tool left at the disposal of Israel’s apologists is the charge of ‘antisemitism’ and they will use it even more unsparingly in the period ahead. No decent person likes to be accused of such a dreadful thing as antisemitism, especially at a time when it is rising up, as part of a tide or right wing racism. However, the weaponisation of antisemitism in the service of the political right and in order to further the colonial domination of the Palestinians must be considered separately and dealt with firmly. A disconcertingly large part of the left has still to understand this.

I doubt that Fatou Bensouda, the Chief Prosecutor of the International Criminal Court (ICC), is a radical leftist but she responded very well recently to predictable slanders from Netanyahu over the court’s investigation if Israeli war crimes. “This of course was anticipated,” she said, “as it is a standard tactic to discredit someone who makes an accusation or takes a contrary position.” She continued, "We will not be distracted or allow our work to be impeded by an agenda-filled disinformation campaign aimed at undermining our work.” A far better response than cringing apologies and a more effective one at that. It is time to stop running away and to face and challenge the false charge that support for Palestinian freedom has anything to do with antisemitism.

John Clarke became an organiser with the Ontario Coalition Against Poverty when it was formed in 1990 and has been involved in mobilising poor communities under attack ever since.