What Happened to the CEP Promised by Ariel Henry? 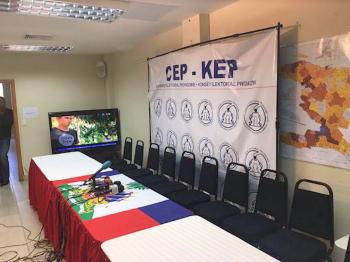 Ariel Henry disbanded the CEP that Jovenel Moïse formed on Sep. 22, 2020. He has not been able to replace its nine members.

As soon as Acting Prime Minister Ariel Henry took office in July 2021, following a tweet by Ms. Helen La Lime, head of the “Core Group” and UN Office in Haiti, the idea of forming a new Provisional Electoral Council (CEP) to replace the one set up by the late President Jovenel Moïse was floated and then codified by the Sep. 11 Agreement’s signatories.

Moreover, a new CEP’s formation is an integral part of that so-called Musseau Agreement, which was greatly inspired by the ranks of the Democratic and Popular Sector (SDP), led by lawyer André Michel. To signal a break with the Jovenel Moïse era and give confidence to his new allies, Ariel Henry made it one of his first decisions to terminate Jovenel’s CEP, formed Sep. 22, 2020, in an inelegant way. This decision was taken in order to ensure the support of all those who had united against Moïse before his assassination and who did not want to hear of elections under the old regime’s auspices.

The Musseau Accord signatories had applauded with both hands this highly symbolic and political gesture, which seemed to mark a clean break with the past. The dismissal of Jovenel Moïse’s CEP was so appreciated by the former opposition that Henry thought the formation of a new electoral body would be a mere formality, especially since, at that time, the other “transition” coalitions, in particular the Aug. 30 Montana Accord, were still groping for their strategy and did not really know what they wanted.

The Montana signatories were still refining their strategy vis-à-vis the new power with the hope that they would drive Henry out to take his place. Meanwhile, the Prime Minister with his new allies and supporters began preparing the formation of a new CEP without any apprehension. The Prime Minister’s team underestimated the social and political rift in the country, relying only on the criteria of being “anti-Jovenel,” and began looking for figures to form this new CEP, which constitutes, in Haiti, a sort of political compass.

Henry’s team immediately sent invitations to various political organizations likely to provide members. The Prime Minister and his advisers were so sure of themselves that they were choosy, even dismissing certain civil society organizations which traditionally were major providers of CEP members.

Meanwhile, insecurity began raging across Haiti. Armed neighborhood groups – some criminal, some fighting criminals – began controlling most of Port-au-Prince and its suburbs. Kidnappings were no longer sporadic acts but became regular and endemic,. The main civil society organizations whom the government solicited to become part of the CEP were the prey in this insecure climate, making it almost impossible for them to participate.

OBVIOUSLY, ARIEL HENRY WANTS TO CARRY OUT ELECTIONS, IF ONLY TO SATISFY THE WISHES OF HIS FOREIGN PROTECTORS.

The troubled climate quickly pushed leaders, parties, and political organizations to have another reading on the situation. Suddenly, almost unanimously, all the political parties, even those which had been clamoring for elections as soon as possible, were forced to call on the Prime Minister to be cautious. They even asked him to postpone the setting up an electoral body in the tense socio-political context. Most political organizations and their leaders came out against the idea of forming a CEP in the climate of insecurity. Civil society organizations which had already nominated their representatives for the post-Jovenel CEP all backed out.

Pressured by public opinion and despite assurance offered by the authorities, the groups one by one began declining to participate in the new CEP, justifying their refusal by saying that it would be an irresponsible act to set up a CEP when everyone is afraid to venture into the streets in and around the capital.

Some socio-political organizations did not want to completely close the door on the Prime Minister, preferring to delay their decisions by saying yes for their participation and agreeing to appoint representatives at some point in the future. They said they wanted to wait for a less tense and more serene political climate to make known their choice or publicly announce the names of their delegates to the CEP.

Some sectors did respond to the Prime Minister’s request and even sent him the names of their CEP representatives, but, in the end, it didn’t help.

Since Ariel Henry took charge of the “Transition” on Jul. 20, 2021, he is on his second attempt to form a CEP. Whenever he has the opportunity, Henry announces that the CEP is coming soon. But each time, a large number of political actors and civil society groups protest that he must first find a consensus with the other Accords, and he backtracks.

Henry is caught between a rock and a hard place. These groups opposed to forming a CEP now act as whistle blowers, warning the Prime Minister not to move ahead without the approval and consent of a large majority of socio-political actors within the framework of the Transition. Meanwhile, the U.S.-led “international community” is putting pressure to hold elections fast. So, Ariel Henry wants to set up a CEP at all costs without the consent of all the protagonists, who constantly ask to give priority, not to the CEP, but to the fight against armed groups.

In fact, assembling a CEP is just one problem. Its installation will also be very difficult because its members, once appointed, must take an oath before the judges of the Supreme Court (Court de Cassation). But, there too, the Prime Minister has a big problem. He has so far failed to convince all the magistrates of the need to fill the voids within the judiciary.

Ariel Henry is having a lot of trouble to continue the long-started process of replacing judges at the end of their term. At each attempt, he comes up against the opposition of the National Association of Haitian Magistrates (ANAMAH), the Council of the Bar Association of Port-au-Prince, or the Haitian Bar Federation (FBH) for constitutional reasons. Some believe that even if Ariel Henry manages to ram through a CEP, as the late President Jovenel Moïse did, he too will face this problem of its unconstitutionality.

But the biggest challenge for Henry remains, unquestionably, the actual organization of elections, which is the CEP’s only raison d’être. However, this is exactly what all those who oppose the establishment of the CEP today fear. These naysayers cannot imagine that the sole purpose of this CEP is to replace the one that Ariel Henry dispensed with in order to reassure most of the Musseau Accord signers. The Musseau Accord rivals assume that any Henry-convened CEP will not carry out a fair election. The United States, France, and Canada want elections as soon as possible in order to shorten the “Transition,” according to the conclusions of the Apr. 21, 2022 virtual meeting. Unfortunately, they don’t seem to understand that a large part of Haiti’s political class reject this idea.

Obviously, Ariel Henry wants to carry out elections, if only to satisfy the wishes of his foreign protectors. But, he is faced with a hard reality. Even his closest allies oppose it, so he fears forming a CEP without the approval of either his friends or his opponents. If he did so, it would have serious consequences. The electoral body would be contested from the start, and the electoral process would generate, without a shadow of a doubt, a new political crisis in a Transition that no one, in truth, controls. So it makes sense that he now hesitates, after two failed attempts, to embark on a third try without being sure of success.

In the small circle of advisors he listens to, it is difficult to sway him. But, an influential and powerful minister recently told him: “If [your next CEP attempt] is to be ridiculed once again by Montana, it is not even worth trying.”

In any case, this psychodrama around the Provisional Electoral Council is holding Haiti hostage. No one knows what will happen if Henry does not manage to curb the insecurity ravaging Haiti and set up a consensus CEP to organize inclusive elections, recognized by all entities.

What we are sure of: the post-Jovenel Moïse Transition will not last five years with Dr. Ariel Henry as chief executive.