What is a physician advocate? 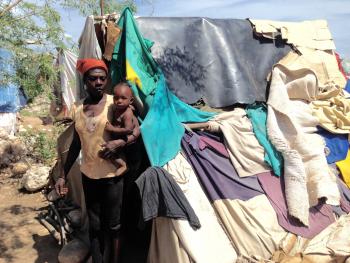 What is a “physician advocate”? I will answer this question by beginning with two stories which come from my work in Haiti. I choose MY experiences ONLY because I am familiar with my struggles attempting to care for people living on the margins of society and can offer personal insights regarding what is involved.

Several years ago I visited two of these camps in southern Haiti near Anse-a-Pitres and found the living conditions for the refugees despicable. When I was there I set up a very primitive medical clinic in one of the camps. My work was purely clinical with my goal to help the person sitting in the broken chair in front of me. But I posted hereon this blog site describing the dangerous conditions in the camps. With posts like this, I wanted everyone to know that these camps existed and I was asking for help for ALL of the refugees in these camps up and down the border.

After a protracted fallout I had with OSF in Peoria in the early 2000s, OSF-Saint Francis Medical Center stopped taking care of my Haitian Hearts patients. Even if the Haitian child had heart surgery at OSF in the past and required repeat heart surgery, OSF did not allow them to return to OSF to be reoperated. And three of my Haitian kids died.

Over the next 15 years, we did bring back many Haitian Hearts patients to different hospitals in the United States for repeat heart surgery. In addition, I wrote letters to OSF Administration, OSF Ethics Committee, and The Catholic Diocese of Peoria, in hopes of bringing back Haitian Hearts patients for repeat surgery at OSF. I received no helpful responses. I wrote a number of forum articles published in the Peoria Journal Star and wrote numerous blog posts regarding this topic. I also picketed OSF regarding OSF’s negligent behavior toward their young Haitian patients who were in Haiti–hidden out of sight and out of mind.

With this background, and using the above two scenarios as examples, I ask the following questions: Should physicians be advocates for their patients? Is that part of our job or should we only be clinicians? Should we stay out of politics? When does our care for the patient end?

First of all, what is a “physician advocate”? The Royal College of Physicians and Surgeons in Canada define physician advocacy as “…responsible use of their (physicians) expertise and influence to advance the health and well being of individual patients, communities, and populations”. Young physicians elsewhere have defined advocacy as “going above and beyond their regular duties.”

Sarah Dobson and her colleagues addressed these types of advocacy in her 2012 “Perspective” article in Academic Medicine titled “Agency and Activism: Rethinking Health Advocacy in the Medical Profession”. They divided advocacy into two components, which they call “agency”—working on behalf of the interests of a specific patient—and “activism,” which is directed toward changing social conditions that impact health, and the effects of which are seen in populations more than in individuals. The difference, they say is that “whereas agency is about working the system, engaging in activism is about changing the system.”

On the Haitian-Dominican border, in my makeshift little clinic, I was examining people like I normally do. To be honest, the word advocacy never entered my mind. But I was advocating for them by working for specific individuals while accompanying them for a few minutes in their hellish existence. I listened to mothers tell me about their sick kids, examined the kids, and treated them with the sparse medication that was donated to me.

Yolanda was nine years old and was one of my patients who lived in the camp. She was living in filthy conditions with a colostomy. Using as much “agency” as I could creatively summon, we were able to have Yolanda successfully operated and her colostomy was closed.

Prior to setting up my clinic in the camp, I met with the local Haitian MSPP doctor in Anse-a-Pitres to obtain his permission. His clinic had virtually nothing to offer the refugees in the camps or the population he served in Anse-a-Pitres. However, the longer I worked on the border, I realized that hardly anyone with any voice wanted these camps to improve. They did not want the camps to be “too good” which could attract more people to scurry across the border from the Dominican Republic to Haiti. Haiti had no capacity to offer these people much of anything. Neither federal governments nor local governments on either side of the border wanted anything to do with these stateless human beings.

Did I engage in activism for the hundreds of thousands of people stranded in cardboard-and-cloth shacks living in the dirt in these camps? Was I trying to create change in the system?

Well, as I stated above, I wrote numerous blog posts describing the dangerous conditions in the camps and offered my answers regarding what should be done to disperse the people to safer environments. But I didn’t go to the Dominican authorities in Santo Domingo and I didn’t go to Haitian authorities in Port-au-Prince and plead for the refugees’ human rights. The medical suffering in these camps was directly due to deadly combinations of politics and greed and racism in both the Dominican Republic and Haiti.

So I made a decision based on multiple factors regarding how far I would get involved in the politics and the societal issues affecting the health of the quarter million people on the Haitian-Dominican border. Every physician has to make a choice regarding how far they will go advocating for their patients.

In the second scenario above, where OSF was failing their Catholic mission philosophy and turning their backs on sick Haitian kids, I advocated for my young Haitian patients using both agency and activism in the only ways I knew.

It was extremely difficult to find other medical centers to reoperate children’s’ hearts, but I was forced to look. Because I had known these young Haitians for so long, they were like family. We were told “no” quite often but we kept looking. It seemed natural to advocate for them within the system. And when a medical center did accept them for repeat heart surgery, we all rejoiced.

Regarding activism, I wrote editorials, blog posts, and letters to OSF administrators and to their ethics committee. I met with our Catholic bishop in Peoria. In my opinion, these actions were all natural things to do and probably would have been called “advocacy by activism”. I simply viewed them as my desperate flailing attempts to save Haitian kids from early deaths from heart disease. No fancy words were needed to describe my efforts.

Being an advocate for anything unusual can lead to big problems. And many potential advocates know this and walk away. I witnessed this many times and felt very sad.

In my recent journey in the 2000’s, I found out quickly what loneliness is all about. Picketing the number one industry in Peoria, the “health-care” industry, was incredibly hard. I wished I was anywhere other than out in front of the largest medical center in Illinois south of Chicago, holding a sign on very cold days. I learned that begging for a few young Haitian lives in front of OSF-Saint Francis Medical Center would leave permanent scars. Dissent over LOCAL issues has consequences.

I also learned that Peoria’s medical community would not support this activism….at least publicly. Local physicians, especially ones owned by OSF, would not support the cause. Hospital employees who had given excellent care to Haitian kids would not join me for fear of losing their jobs. As I walked the sidewalk in front of OSF-SFMC holding my sign, I remember a nurse who I had known for 20 years literally hiding behind a wall in front of a building across the street. She occasionally popped her head up above the wall to see what I was doing. A physician who I had worked with for over a decade, walked behind some trees so he would not be mistaken for walking with me. The resident physicians at OSF had no choice but to protect their futures. They were told in no uncertain terms to be silent. Even the Catholic chaplain at OSF was sent out to talk with me. I told him I had never been granted one meeting regarding OSF’s refusal to accept my Haitian kids back for repeat heart surgery. I stressed to him that picketing the hospital was my only recourse.

The University of Illinois College of Medicine in Peoria (UICOMP), which is just down the street from OSF, was silent. They said nothing and offered the Haitian kids no support. And that brings me to the following questions: In the education of students and resident physicians, should we teach them to be advocates for their patients? If yes, how would one teach this? We teach them what monoclonal antibodies are and we teach them the utility of point of care ultrasound, but do we ever even mention advocacy, agency, or activism? Should advocacy be considered part of the core curriculum of medical education?

I believe medical school applicants should be chosen not just on their academic abilities but on their perceived potential to act as caring human beings. Everyone at every level who considers themselves “health care providers” should teach young medical students and young physicians about advocacy by their own examples.

Should hospital administrators and medical center boards of directors be hired on their ability to be advocates for patients? Or should boards be totally composed of local bank presidents, university academicians, and business leaders with little affinity or empathy for sick people? This is an important question because the administrators and executives at OSF played a huge role as gatekeepers deciding that Haitian kids would not be accepted back for life-saving repeat heart surgery. Making that fateful decision, which led to dire consequences, was a huge responsibility.

So what is patient advocacy? I believe it is simply treating one’s patients as if they were your mother. Patients deserve physician support beyond the office door. We need to work the system for our patients and change the system for patients everywhere. Physicians need to summon up all the courage they can to support their patients against forces that would like to ignore and destroy them.

Physician silence is not the answer. Silence does not lead to advocacy. Solzhenitsyn wisely wrote in the Gulag Archipelago: “In keeping silent about evil, in burying it so deep within us that no sign of it appears on the surface, we are implanting it, and it will rise up a thousandfold in the future. When we neither punish nor reproach evildoers, we are not simply protecting their trivial old age, we are thereby ripping the foundations of justice from beneath new generations.”