Is the White House greenlighting Haiti’s descent into dictatorship? 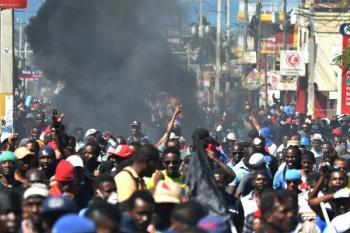 As thousands of Haitians protest each Sunday against Jovenel Moïse, their embattled and increasingly authoritarian president, their protest signs and songs exhort the U.S. ambassador and the head of the United Nations mission in Haiti, who is also a career U.S. diplomat, “to stop supporting a dictatorship.”

The protests reflect a broad consensus among politicians, intellectuals, lawyers and others in Haiti, supported by human rights experts and members of the U.S. Congress, that the Biden administration is propping up Moïse and preventing the emergence of a Haitian-led solution to the political crisis.

The Trump administration had backed Moïse despite revelations of spectacular corruption, government-linked massacres, and the expiration of Haiti’s parliament. In just one incident, the 2018 La Saline massacre, government-allied gangs killed at least seventy people to retaliate against anti-government organizing in the neighborhood. I interviewed survivors, and their stories were eerily similar to the stories I had heard 30 years before from the survivors of the 1988 St. Jean Bosco Church massacre — also in La Saline — by the vestiges of Jean-Claude Duvalier’s Tonton Macoute death squad.

Haitians were hopeful that the Biden administration would change course before February 7, the day that Moïse’s term in office ended, according to Haiti’s judicial oversight body, the bar federation, and religious leaders, as well as the leadership of the U.S. House Foreign Affairs Committee. But on February 5, the State Department, citing the position of Luis Almagro, Secretary-General of the Organization of American States, pronounced that Moïse’s term extended until 2022. This interpretation is based on a constitutional ambiguity generated by election delays in 2015 and 2016. But, as most commentators note, it is inconsistent with electoral law and with precedent set by Moïse himself.

Taking Moïse’s side might have been an attempt to manage Haiti’s political crisis at a time when the administration’s attention is focused elsewhere. But Moïse proceeded as if this support provided a green light for continued repression. Before sunrise on February 7, his police arrested Supreme Court Justice Yvickel Dabrésil and at least 19 other suspected dissidents, illegally, alleging they were planning a coup d’état. The next day, Moïse, fired Dabrésil and two of his Supreme Court colleagues, who, under the country’s constitution, can only be removed by parliament. Haitians who protested the arrests and other autocratic measures were met with police beatings, tear gas and bullets, as were journalists covering the protests.

The State Department added gaslighting to its green light on February 12, claiming there had been a “remarkable lack of popular response to calls for mass protest in recent weeks.” The State Department knew very well that Haitian demonstrators had been subjected to violent attacks by government forces and allied militias once they marshaled in the streets. Indeed, the Department of Homeland Security reported in February that the government was using gangs “to repress the opposition,” and noted “President Jovenel Moïse’s increasingly authoritarian tendencies.” With Washington nevertheless still backing Moïse, police escalated their attacks, shooting one journalist with rubber bullets 14 times on February 14. Moïse’s Washington public relations firm ensured that the international press saw the State Department’s statement.

Moïse’s most audacious power grab was setting a June 27 constitutional referendum, to precede parliamentary and presidential elections now set for September. If it goes forward, a referendum would flagrantly violate the existing constitution that was drafted just two years after “Baby Doc” Jean-Claude Duvalier “won” a constitutional referendum affirming him as President-for-Life. It requires supermajorities in the parliament to approve amendments, and expressly prohibits “any popular consultation designed to modify the Constitution through a referendum.”

Moïse’s referendum is subtler than Duvalier’s, but possibly more dangerous. It would abolish the Senate and replace the prime ministerial system — which balances executive and legislative power — with a vice president named by the president, and would provide for direct presidential control over the ministries. The referendum would also allow Moïse to handpick the electoral council that would organize the next two presidential elections, potentially extending his personal power as far as 2032. It would allow the president to directly command the army and grant total immunity for any actions “linked to his functions and accomplished in his role as President.”

But the Biden administration has failed to criticize Moïse’s referendum, while the United Nations has offered its technical assistance for its implementation. This is setting Haiti up for at least another year of escalating turmoil in the short term, unchecked and abusive executive power in the medium term, and stunted democracy and instability for as long as anyone can see into the future.

Haitians will pay the heaviest price for Moïse’s power grab, but the United States will pay, too. Dissidents will flee from repression and an economy devastated by political conflict no matter how many are sent back. Instability in Haiti will provide new opportunities for narcotics smuggling to the United States. U.S. resources will eventually have to be invested to help put Haiti back together again.

The State Department pushed back lightly and inconsequentially against Moïse’s Supreme Court takeover and the abuse of his decree powers, but has otherwise applied little pressure other than insisting that parliamentary elections take place. But this plays directly into Moïse’s hands: for four years, as one deadline after another passed, he has promised elections while expanding his own powers. There is now no chance that elections will produce a parliament able to balance the president’s power until the last month or two of his term.

Moïse also knows from history that if he delays elections long enough, an impatient Washington will accept a manipulated process. Moïse’s two elected predecessors — Michel Martelly in 2015/2016 and René Préval in 2010 — both strung out elections until the Obama administration put its financial and diplomatic weight behind deeply flawed processes that produced the predicted catastrophic results. Most Haitians, on the other hand, do not believe that Moïse will run fair elections after four years of systematically undermining democracy, so they will likely refuse to participate.

Further descent into autocracy in Haiti, however, is not inevitable, and the Biden administration can help stop it. Washington does not have to — and should not — bring Moïse down; rather, it should just stop propping him up. Removing our support would force Moïse to negotiate with his opponents, opening the way to a Haitian solution that builds, rather than undermines, the country’s independence. Haitian civil society has forged a broad consensus that a transitional government headed by a Supreme Court justice charged with promptly organizing fair elections can provide a constructive exit from the crisis. They believe that the broad opposition to Moïse could compel him — non-violently — to accept a transition so long as the United States stopped propping him up. This path does carry some risk of further turmoil, but most Haitians would gladly accept that risk over the certainty of deepening autocracy under Moïse.

The Biden administration can start supporting a negotiated, Haitian-led solution to the political crisis by acknowledging the civil society consensus that Moïse’s legal term has ended. It can then oppose the pending constitutional referendum and refuse to provide any financial support — either directly or through the U.N. or the OAS — for its implementation.

Finally, the United States should apply its own sanctions laws wherever the evidence justifies it. In December, the Treasury Department imposed Global Magnitsky Act sanctions on two former Moïse administration officials implicated in the La Saline massacre, establishing a precedent for additional action against other officials engaged in repression or corruption. The State Department should also review the evidence of serious abuses by security forces and withhold funding and training to them under the Leahy Law.

Unchecked, Moise is steering Haiti toward a more authoritarian future. The Biden administration can use its considerable influence to change that trajectory.