WikiLeaked diplomatic cables reveal: Rudy Hériveaux is a “close contact” of the U.S. embassy in Haiti 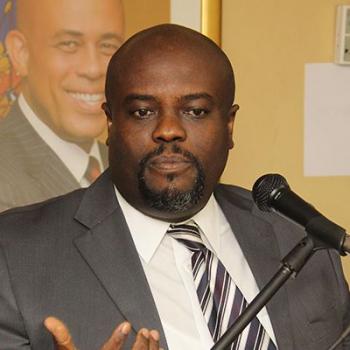 Haiti's current Communications Minister Rudy Hériveaux became a focus of popular rage in November when, in an editorial, he labeled as "cockroaches" the thousands of demonstrators now marching almost daily to demand President Michel Martelly's resignation.

But for at least a decade, Hériveaux has been a regular and trusted source for the U.S. Embassy in Haiti, according to the secret diplomatic cables of several U.S. ambassadors and chargés d'affaires obtained by the media organization Wikileaks and provided to Haïti Liberté.

The cables paint a picture of a thoroughly unscrupulous self-promoter - "opportunistic" according to one cable  -  who attempted to hijack leadership of the Lavalas Family party of former President Jean-Bertrand Aristide while the latter was exiled in South Africa from 2004 to 2011.

Although Hériveaux was "a close embassy contact," in the words of one cable, U.S. officials gave credence to the assessment of Sen. Simon Dieuseul Desras that "Senator Hériveaux's history shows he is not a true Lavalassian and has never been recognized as such." Although Hériveaux may soon be out of a job following the Dec. 13 resignation of Prime Minister Laurent Lamothe, he nonetheless promises to continue as an actor on Haiti's political scene since, as the cables show, his modus operandi appears to be to insert himself into whatever political current he sees as ascendant.

Rudy Hériveaux was first elected in 2000 as a deputy from Trou du Nord in Haiti's 47th legislature under the Lavalas Family (FL) banner. He went on to be elected as a Lavalas senator for the West Department in 2006, although the faction of the then-splintered Lavalas Family party that he represented was in deep conflict with more militant currents, particularly those led by the late Father Gérard Jean-Juste and popular organization leader René Civil.

The reason for this ostracism was because Feuillé and Hériveaux were part of a breakaway "moderate faction" of Lavalas, Foley explained. "Those in the moderate faction, more diverse and less vocal, insist they want to participate in the elections, that they represent the original spirit of the Lavalas movement,  and that FL itself has been discredited by Aristide and his misgovernance," Foley wrote after meeting with them.

The group said "that they are confident of a Marc Bazin victory in the upcoming [presidential] elections," U.S. Ambassador Timothy Carney wrote. Marc Bazin was a former World Bank official who was briefly dictator Jean-Claude Duvalier's Finance Minister, then Washington's neoliberal candidate and the principal challenger to Aristide in the Dec. 16, 1990 election, then briefly Prime Minister of the military government that sent President Aristide into exile from 1991 to 1994, finally to become the presidential candidate of the "moderate Lavalas" faction in 2006. "

The key to a Bazin victory, according to Hériveaux, is success in the North and in Port-au-Prince," Carney reported. "Nevertheless, Gilles said that a Bazin-Siméus runoff is agreeable to them, and that a Bazin presidency with Siméus as Prime Minister would be good for Haiti." (Dumas Siméus was a conservative Haitian-American millionaire businessman living in Texas who in 2005 was Washington's favorite presidential contender, mostly because he was a U.S. citizen. That status resulted in his disqualification from the 2006 race because the 1987 Haitian Constitution did not allow dual nationality for high government officials.)

Nonetheless, Hériveaux worried that the Provisional Electoral Council (CEP) might rig the vote in favor of the social-democratic party Fusion, and "Hériveaux implored Polcouns to be vigilant with respect to the CEP," Carney wrote.

Astonishingly, Hériveaux and the Lavalas "moderates" were begging the U.S. Embassy to oversee sovereign Haitian elections. This small but telling episode augured much about Rudy Hériveaux's future.