A year of growing revolution: A retrospective on 2019 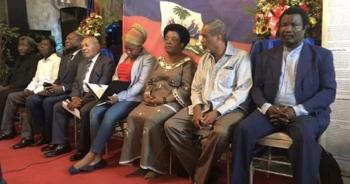 Eight of the nine members of the Consensual Alternative for the Refounding of Haiti’s “Commission for the Transfer of Power” tasked with planning “the immediate and orderly departure of Jovenel Moïse.”

Indeed, “system change” is the watch-word one hears often from the youths skirmishing with police patrols. The threat that 2019’s “lock-down” mobilizations present to the capitalist system in Haiti, where factories and businesses have been shuttered for weeks on end, has motivated many leading figures of Haiti’s comprador bourgeoisie – like Reginald Boulos or Bernard Craan – to fund and posture in support of the revolt in an attempt to salvage the system. The intransigent Jovenel, with his backing from an equally pig-headed U.S. President Donald Trump, is threatening to bring the whole kit and kaboodle down, they fear.

September through November saw almost non-stop demonstrations with the regime playing pure defense. But in December (when, historically, popular mobilizations slow down for the holidays), Jovenel, the U.S. Embassy, the OAS, UN, and Vatican ramped up their counter-offensive of pushing for “dialogue” and “compromise,” calls they eschew in Venezuela and Bolivia.

The magic date, they think, is Jan. 13, 2020, when Haiti’s Parliament will expire because elections have not been held. At that point, Jovenel Moïse will be able to rule by decree and impose any kind of Prime Minister and government that he chooses, since Parliamentary ratification will be moot. The two PM candidates he has proposed – Jean Michel Lapin and Fritz William Michel – since Jean Henry Céant’s ouster were never ratified.

But, as the Haitian proverb says, this may be a case of “byen konte, mal kalkile” – counting well but calculating poorly. By removing all brakes on Jovenel Moïse and any buffer between him and the enraged Haitian masses, U.S. strategists may only make the situation worse. Jovenel has already canceled plans to speak, as tradition dictates, at the Jan. 1 independence ceremonies in Gonaïves out of fear for his security and large demonstrations.

Meanwhile, as the crisis persists, Haitian progressives are slowly but surely building the political organizations and parties which will hopefully soon be able to convert Haiti’s giant mobilizations from human waves crashing against rocks into organized and disciplined armies fighting for social and system change.

The following is a brief review of significant events in Haiti and its diaspora from the past 12 months.

Jan. 7, 2019 – Haïti Liberté, Family Action Network Movement (FANM), and nine other plaintiffs bring suit in Federal Court in Brooklyn against the Trump administration for violating the law and procedure in terminating Temporary Protected Status (TPS) for Haitians in 2018.

Jan. 10, 2019 – For the first time, Haiti votes against Venezuela at the Organization of American States (OAS) in Washington, finally succumbing to U.S. pressure that it condemn Venezuelan president Nicolas Maduro as “illegitimate.”

Jan. 31, 2019 – Haiti’s Superior Court of Auditors and Administrative Disputes (CSCCA) issued the first of two reports on government corruption and malfeasance in pulling money from the PetroCaribe Fund, fed by revenues from the sale of Venezuelan oil from 2008 to 2018.

Feb. 7, 2019 – Giant demonstrations demanding the resignation of President Jovenel Moïse rock cities and towns across Haiti, fueled by the CSCCA report and Haiti’s betrayal of Venezuela. For the next 10 days, the “Ayiti Lòk” (Haiti Lockdown) mobilization paralyzes all businesses, government offices, and schools across the nation.

Feb. 17, 2019 – Haitian police arrest seven heavily-armed foreign mercenaries near Haiti’s central bank in the capital. They were there, a joint investigation by Haiti Liberté and The Intercept revealed, to steal $80 million from a Venezuelan PetroCaribe escrow account in the Bank of the Republic of Haiti (BRH) and transfer it to an account controlled by President Jovenel Moïse. Through U.S. Embassy intervention, the mercenaries are illegally freed from jail and flown back to the U.S., where they are never charged with any crime.

Feb. 25, 2019 – Experts from the International Monetary Fund (IMF) begin a 12-day visit to Haiti during which they structure a $229 million three-year no-interest loan to Haiti. But so far, there is no government to receive it.

Feb. 26, 2019 – After having been arrested for arms trafficking on Oct. 26, 2018, former chief of the Haitian National Police Godson Orélus is freed by an appeals court in Gonaïves.

Apr. 9, 2019 – At the OAS, Haiti again votes with Washington against Venezuela, recognizing the ambassador of self-proclaimed President Juan Guaido.

May 5, 2019 – At a FOP press conference in Port-au-Prince, Jean André Victor of MOPOD proposes that the Haitian opposition establish a self-proclaimed president and parliament. The idea doesn’t get far.

May 20, 2019 – Haiti’s judges, lawyers, and other justice workers go on strike nationally demanding back salaries, better work conditions, and the repair of courthouses. Interns at the capital’s Hospital of Haiti’s State University (HUEH) and several other hospitals around the country also went on strike that day demanding back wages and better conditions and security.

May 31, 2019 – The CSCCA releases its second report on PetroCaribe corruption. This one is an even greater bombshell than January’s because it reveals that two companies (that were in fact one in the same) belonging to Jovenel Moïse received close to $2 million in pre-paid no-bid road repair contracts that were never carried out.

Jun. 4, 2019 – Workers at the General Direction of Taxes (DGI) go on strike to demand a wage increase.

Jun. 9, 2019 – Outraged by the latest CSCCA report, thousands take to the streets around Haiti demanding the president’s resignation.

Jun. 10, 2019 – Journalist Pétion Rospide of Radio Sans Fin is fatally shot in his car in Port-au-Prince. The opposition lays responsibility for the killing on the government.

Jun. 16, 2019 – Led by journalists, thousands march in the capital to protest the assassination of Pétion Rospide and demand Jovenel’s resignation.

Jun. 19, 2019 – Washington’s ambassador to the OAS, Carlos Trujillo, led an unauthorized and widely denounced delegation to Haiti to show support for President Moïse.

Jun. 21, 2019 – Haiti’s largest opposition coalition baptizes itself the Consensual Alternative to Reestablish Haiti (ACRH) in a press conference at the capital’s Oloffson Hotel.

Jul. 2, 2019 – The Petro-Challenger group Nou Pap Dòmi (We’re not sleeping) unveils a 13 point program for change that differs from the traditional opposition’s strategy.

August 2019 – Fuel prices spike as gas shortages are felt throughout Haiti because the Haitian government cannot pay what it owes gas distributors.

Aug. 29-30, 2019 – Opposition groups meet in Papaye, on Haiti’s Central Plateau to map a strategy and establish the Patriotic Forum of Papaye.

Sep. 3, 2019 – After three postponements during August and despite the room’s trashing by opposition deputies, Haiti’s lower house votes to ratify Fritz-William Jean for Prime Minister. However, the Senate never votes, and he soon fades from view.

Sep. 23, 2019 – Ruling party Sen. Jean Marie Ralph Fethière fires his pistol wildly outside the Parliament, wounding two, as businesses close, demonstrations rage, and buildings are burned in the capital and other towns. The president cancels his travel to New York to address the United Nations General Assembly.

Sep. 24 – Oct. 12, 2019 – Haiti is once again “locked down” for over two weeks – its streets bare, businesses, government offices, and schools closed, embassy personnel grounded –  as demonstrators mount barricades and demonstrations to demand Jovenel’s resignation and to warn against foreign intervention. Police and paramilitaries kill dozens of demonstrators and militants.

Oct. 8-13, 2019 – Rival opposition coalitions name their committees to ensure a transition from Jovenel’s regime to a provisional government.

Oct. 13, 2019 – In one of Haiti’s largest demonstrations ever, tens of thousands turn out to a demonstration organized by Haiti’s most popular musicians demanding that Jovenel step down.

Oct. 15, 2019 – After weeks of absence from the public eye, Jovenel Moïse holds a brief Palace press conference to say that it would be “irresponsible” for him to step down. He claims to be fighting “against a system,” an attempt to coopt growing calls for systemic change, not just Jovenel’s ouster.

Oct. 22, 2019 – A new opposition coalition named “Mache Kontre” (Walk to Meet Together) is formed, made up of Haiti’s social-democratic parties.

Oct. 27, 2019 – Hundreds of police officers march through the capital to demand a wage hike, better work conditions, and the right to unionize.

Nov. 3, 2019 – In Brooklyn, NY, close to 200 Haitians march down Nostrand Avenue from Eastern Parkway to Newkirk Avenue to demand Jovenel Moïse’s resignation and condemn U.S., UN, and OAS support of his regime. Similar marches take place in Montreal and Miami.

Nov. 5, 2019 – Yet another opposition coalition, the Democratic Bloc for National Recovery, is formed, composed of 37 organizations.

Nov. 8-10, 2019 – Haiti’s five principal opposition coalitions meet at Port-au-Prince’s Marriott Hotel in an effort to hammer out an operational unity.

Nov. 17, 2019 – Haitian police officers hold a second demonstration in the capital to demand better wages, working conditions, and a union.

Nov. 20, 2019 – U.S. Ambassador to the UN, Kelly Craft, visits Haiti in an attempt to broker dialogue between the opposition and Jovenel Moïse.

Nov. 28, 2019 – Former MINUSTAH chief Edmond Mulet proposes militarily reoccupying Haiti at a conference, which did not include Haitians, in Santo Domingo, Dominican Republic entitled “Destabilization of Haiti: Obstacles and Challenges.”

Dec. 5, 2019 – Under the leadership of former Senate president Déjean Bélizaire, a second bogus accord, which would deliver a “consensus Prime Minister” was signed by regime allies at the Kinam II Hotel in Pétionville. One analyst characterized is as an “accord of dupes.”

Dec. 6, 2019 – David Hale, the U.S. State Department’s Under Secretary of State for Political Affairs, visits Haiti to, like Craft, promote dialogue between Jovenel and the opposition.

Dec. 14, 2019 – Venezuelan President Nicolas Maduro announces that his nation will resume the PetroCaribe Alliance in the first half of 2020, but a Venezuelan official says that Haiti has “excluded itself” from the cheap oil and generous credit program.

Dec. 16, 2019 – Under the leadership of U.S. Deputy Assistant Secretary of State of Western Hemisphere Affairs Cynthia Kierscht, a conference of Haitian and Dominican businessmen was held in Miami to discuss cross-border commerce, among other issues.

Dec. 18-19, 2019 – The BINUH and Vatican hold a meeting at the Vatican’s office with opposition members and government allies. At the end, the BINUH issues the results of a supposed poll it undertook, saying that “nine out of 10 Haitians support dialogue as the best way to get out of the current situation.” The Haitian opposition denounces the report as another attempt to bolster Jovenel Moïse, issued the same day that Kierscht arrived in Haiti to meet with the president and business leaders. They vow that the mobilization to oust Jovenel Moïse will continue in 2020, starting Jan. 1, Haitian independence day.