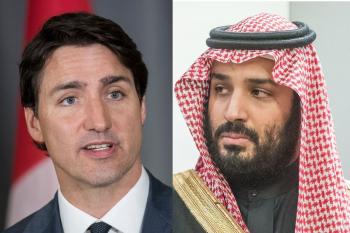 The following five articles report on the famine in Yemen. The United-States and Canada continue to support  Saudi-backed genocidal war.

The United Nations has issued a new warning about starvation in Yemen, calling it one of the worst famines the world has seen where the level of suffering is so staggering the head of the World Food Program (WFP) says it is a "disgrace on humanity."

WFP Executive Director David Beasley recently visited Yemen and said he was horrified by what he saw.

"I'm standing here in this hospital room where this child, literally, is on the verge of death. In fact, 400,000 children are at risk of dying right now," Beasley told reporters on Wednesday.

"It's a horrible situation. It's a disgrace on humanity what’s happening here," he added.

The World Food Programme is warning Yemen is headed toward the biggest famine in modern history, with the U.N. agency projecting around 400,000 Yemeni children under the age of 5 could die from acute malnutrition this year as the Saudi war and blockade continues.

CNN senior international correspondent Nima Elbagir says Yemen is accurately described as “hell on Earth.” Her latest report from inside Yemen details the devastating impact of the conflict on civilians, including widespread fuel shortages affecting all aspects of life. “We were utterly unprepared for what we found when we got there,” says Elbagir.

Canada’s most widely known involvement in the Yemen war is its $15 billion arms deal with Saudi Arabia.

The deal was first initiated by the Conservative government in 2014, but sales have increased under Trudeau’s Liberals. The main part of the deal was the shipment of Light Armoured Vehicles (LAVs) supplied by General Dynamics Land Systems Canada (GDLS-C).

In a report for the period ending in June, 2020, the panel included Canada on a list of countries selling arms to those waging the conflict in Yemen: a coalition led by Saudi Arabia, and Houthi rebels backed by Iran.

The countries identified in the report, which also include the United States, Britain and France, “continued their support of parties to the conflict including through arms transfers, thereby helping to perpetuate the conflict," the report said. It was the third report issued so far by the UN Human Rights Council’s panel on Yemen.

After Saudi Crown Prince Mohammad bin Salman ordered the killing and dismemberment of journalist Jamal Khashoggi in October of 2018, Trudeau treaded carefully regarding the murder. Ten days later, the Canadian Press reported that “the prime minister said only that Canada has ‘serious issues’ with reports the Washington Post columnist was killed by Saudi Arabian operatives inside Saudi Arabia’s consulate in Turkey.” Six weeks later the Liberals sanctioned 17 Saudi nationals over the issue, but none of them were in positions of significant authority.

In April of last year, the Saudis beheaded 37 mostly minority Shiites. Ottawa waited 48 hours (after many other countries criticized the mass execution) to release a “muted” statement. What’s more, the Trudeau government stayed mum on the Saudi’s effort to derail pro-democracy demonstrations in Sudan and Algeria in 2018/19, and failed to release a critical statement condemning Riyadh’s support for Libyan warlord Khalifa Haftar’s bid to seize Tripoli by force.